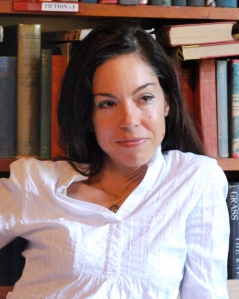 In a tiny book-filled atelier in the 14th Arrondissement, Heather Hartley wrote most of the poems in KNOCK KNOCK (Carnegie Mellon University Press, 2010), her debut collection. Across Paris, in another book-lined room—above the legendary Shakespeare & Company bookstore, where she curates the Monday night reading series—Hartley conducts interviews for Tin House magazine, grilling literary luminaries from poet-activist Breyten Breytenbach to sensualist Catherine Millet (The Sexual Life of Catherine M.)

As Paris editor for Tin House, Hartley, who grew up in West Virginia, has lived in France since 2002. She runs poetry workshops for teenagers and teaches creative writing and poetry at the American University of Paris. Shortly before her book came out in January 2010, Hartley learned she was grounded for medical reasons and couldn’t travel for months; when she broke the news to Tin House, the staff threw a New York launch party in her honor, with readings from KNOCK KNOCK by Matthea Harvey, Brenda Shaughnessy, and Elissa Schappell.

For her first interview, Heather Hartley talked with fiction writer Dylan Landis, author of NORMAL PEOPLE DON’T LIVE LIKE THIS (2009), about litany, detail, live nude models, and the expat poet’s use of language. They talked in France, at times aloud and at times with dueling laptops across an antique table in a borrowed Saint Cloud chateau.

Dylan Landis: In fiction we say: “Specificity is generosity.” Your poems are anchored in detail, even in scenes you’ve invented—for example, this excerpt from “Nudes in a New England Barn,” in which classical artists and their models wander and mingle, utterly in character:

In back of the barn, Jane Avril adjusts her stockings.
The three flaunting graces are there, La Goulue picks straw bits from her hair. Paris sits in a corner judging. Toulouse-Lautrec’s green whores mill around touching their enormous hair. Elizabeth Siddal takes another draught of laudanum. Two Austrian girls mutter guttural swears and curse an absent Egon S., lover and depraved pervert extraordinaire.

Giacometti, worried, searches for Diego’s head among the dung and damp hay.
He’s lost the damned metaphorical thing again, and knows he must start over from scratch—give the poor man another cigarette. Rodin knits his knotty, plaster-crusted hands in his beard, unsure of what to do next.

The straw bits in the hair, those plaster-crusted hands! What’s the role of detail in your poetry?

Heather Hartley: It’s often in this detail, in an out-of-the-way corner of the room at a party, or in your peripheral vision on the subway, that something intriguing happens. Out-of-the-way-details have fascinated me for years—lost things you might not necessarily see, and even less so record.

Nabokov urges, “Caress the detail, the divine detail,” and that’s what I try to do. Concrete detail, as perceived through the five senses, helps root the poem both on the page and in the physical world. It can create an epiphany for the reader, too, because if your work is rooted in the physical, you have a foundation on which to build your house—your poem—and the reader may trust you more when you attempt the abstract.

DL: Do you wait for inspiration, actively seek it, or glue yourself to the chair regardless of mood?

HH: If I were to wait for inspiration, it would take a few seasons—if not years—to finish a poem! For me the essential inspiration is to sit down at the desk, stay there, and write. Even if it means writing drafts and drafts. It’s through this pushing, this searching, this writing through the muck, that something happens.

Many different things can prompt a poem: a phrase I’ve heard, an image I’ve seen, a quote I’ve always wanted to incorporate. I keep a notebook of these things, so when I put in my time at the desk, searching, I always have these notebooks around.

Epilogue in a City Garden

An old couple, bent, the lady with a humpback, the man with a cane and a small hat, move barely across the way in front of me. I try to read. Looking up from the edge of my book, their shuffling feet chalk up white ground and raise cursive from the margin where I start up in my olive metal chair—indentions on my back and legs. Their narrow bodies like roman numerals.

How many chapters have they lived together? Enough to hump her back the shape of an “n” and he bent over into his cane pressing down on the earth pressing up against him, the letter “R.” Back down again into my book, another paragraph, and the old woman trips against a small white stone, a comma, then the man steadies her with his crumpled hand, curved and rounded from so many
cigarettes and breasts, curved with love and with life, it curves a “c” around her frail waist. Flowers fan behind them, a delicate wheel, folding out, in light colors, towards a sky of printed pages.

DL: Who are the poets you return to again and again?

I go to Eliot and Plath for structure. I had a brief stint at Bard College as an undergrad and spent a lot of time lurking in the library, and discovered real jewels: lots of LPs of poets reading their own work. I listened to Eliot and Plath again and again on these scratchy disks, Eliot for intonation—in a strange way his nasality was mesmerizing—and Plath for cadence and intonation, and Dylan Thomas for his absolute musicality.

Dean Young was not on those LPs, but I’ve heard him read many times and he’s wonderful. So Dean Young for a punch of modernness and humor.

And Dr. Seuss. This is true—I’m not being flip. I still read Dr. Seuss.

HH: I think humor is essential in poetry; as Seuss says, “From there to here, and here to there, funny things are everywhere.” And by funny I mean the ability of a poem to look at the world with a bit of a skew or a sly twist that makes it impossible to detach the poignant from the amusing, or to detach the hilarity of the star-bellied Sneeches from the sorrow of a world with a caste system.

I love the way Dean Young, for example, in “Not in Any Ha Ha Way,” amuses us with the image of the poet in supermarket, pressing his ear to the butter, which cries out—and then segues over to the laboratory where monkeys are studded with electrodes, a desperately sad image, as the scientists

…still don’t know if life
is suffering therefore beautiful or
life is beautiful therefore we must suffer.

DL: You’re an American living in Paris; you write in English, but speak French all day. How does this affect your use of language on the page?

HH: At first, seven years ago, I was very conscious of being surrounded by a foreign language, an alien tongue, and French phrases appeared in my work exactly that way—like foreign matter injected into the poem.

But when you’re living with two languages, you’re sleeping with both. You have to make room in the bed for both. I dream in French now. It insinuates itself; it arises from inside; it doesn’t need to be injected anymore.

Now there’s something unconscious going on. In “Pledge,” some expressions seemed to work better in French than in English; I didn’t tack them on. L’entre deux jambes–between the legs–it’s very sexual, and it came to me naturally in French, as a play on entre jambes, the ballet move.

I. Turn of a Century
When menstruation was alarming and Mesmer all the rage,
when hysterical women were locked away—
forced flowers in a hothouse, les fleurs du mal—
when one was sane or insane with nothing
in between but a doctor’s pince-nez,
the Lumière brothers, gods of the seventh art,
sat on the board of a sanatorium and made decisions about madness.

—excerpt from The Seventh Art in the Sanatorium

DL: What happens in a litany that doesn’t happen in other poetic forms?

HH: I love the way litany incorporates repetition while simultaneously leading the reader forward line by line. It reminds me of a whirling dervish—spinning round repeatedly in one place and at the same time moving forward, constantly accelerating. Litany is a compelling force.

Etymology has always fascinated me and litany means ‘entreaty’ or ‘supplication.’ It’s a form firmly rooted in its lines while entreating the reader to get caught up in the spell, and advance.

DL: Three foreign cities saturate your work—Paris, St. Petersburg, and Naples. So just to work in travel, humor and litany all at once, let me end by excerpting the beginning, the first quarter, of “New Years’ in Napoli,” from KNOCK KNOCK

1.
It’s New Years’ Eve and there’s a scorpion in the bathroom.

3.
Is it bad luck to eat the salami of a dead man?

4.
It’s New Years’ Eve and there’s no hot water in the apartment—this is bad luck.

5.
Is it bad luck to eat the provolone of a dead man?

6.
The poisonous mix of no hot water and the scorpion in the bathroom is really bad luck.

3 responses to “Interview: The Divine Details of Heather Hartley”