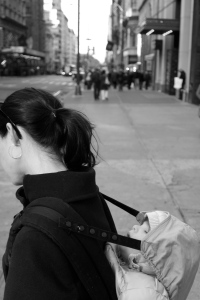 In this jmww ORIGINS, Sara Lippmann discusses the origin of “Tomorrowland,” which originally appeared in the Summer 2010 issue of BLIP Magazine.

When my son was a baby and we lived in Texas we’d go to the mall because the mall is where people go in Texas after church, in the summer, at any given moment, and Lord knows as outsiders we were looking for company. Children would gather by the large indoor fountains to balance on the rail or pose for family pictures. The wells of poured concrete winked with wished-upon coins. There was a bench where I’d sit and snack, rock the stroller, watch little girls dolled up in shadow and sequins twirl past with shopping bags and jumbo-sized smoothies. True, I was in Dallas: pageant country, birthplace of the bottle blonde, where’s it’s tough to spot an un-altered breast; true, too, I was in a mall, of all places, but I remember feeling relieved I had a son and smug as hell I’d never be the kind a parent who’d let their toddler prance around dressed like that.

Then I had a daughter.

I finished writing “Tomorrowland” almost a year before the release of Peggy Orenstein’s new book (which I haven’t read) but her title, Cinderella Ate My Daughter, says it all: Princess culture is a strong scary beast. It dotes on appearance, sexualizes young girls with its license-stamped lipsticks and nail polishes, it delivers a bogus package of princes and happily ever after. At the center of this marketing maelstrom lies Disney. Particularly insidious for directing its bikini-clad mermaids at the diaper set, Disney is no different from the mainstream, which disseminates these values through diamond ads and thick fashion pages. At any age, we are susceptible. It’s nothing new. The same story sells and sells.

My story began years ago with that image of girls in a Texas mall. When it came time to write it was fast and first with structure. A criticism I often receive is where’s the arc, the conventional movement readers have come to expect from short stories. This is something I resist, however unwisely, because although I am interested in moments of recognition, I have grown less curious about the character activated by that self-awareness and more drawn to the character who remains inert, to those who endure despite the futility, who if anything must stage their own private struggle from within the closed confines of a box. It is a story doomed from the outset and I wanted the reader to feel that inevitability so I went online and found a map of the Magic Kingdom to use as a frame. The landmarks were irresistibly loaded–Toontown, Adventureland, Fantasyland, Tomorrowland–and I plotted accordingly, so despite the forward motion the characters are imprisoned by Disney, steered by its surrounding machinery, their path impossibly predetermined.

The cuts and flashbacks were meant to highlight the mother, but also to foil Violet and underline the present action between her and her father. The hope was these fragments would form a fuller picture. As the narrator watches Violet gobble up praise she traces her own desires–to be accepted, acknowledged, validated. This need for outside approval has backed all of her actions: with classmates at a sleepover party, in an closet in junior high, resignation to a man who thought her pretty enough as-is. At what price? The cost of selfhood.

“Tomorrowland “is probably the most deliberate work of fiction I’ve written. Nothing is accidental. Innocent gestures are sexualized in an unsettling way because there is no escape from the culture that shapes and commodifies them. Sure, it is a story of Disney World as an overhyped and overpriced America, where families blow their savings on false hopes and short rides that bottom out into gift shops stocked with candied mementos. But it is also a story of sex and power and how they dictate relationships: between a mother and a daughter, a father and his (non-biological) daughter, and a husband and a wife.

“I worry my daughter will meet a nice man” speaks to the disturbing effects of such messages. We’ve become so inured to them that people don’t think twice about pouring compliments into clothing and looks, reinforcing surface as paramount. Niceness abounds. Disney may be a glaring example, but even the well meaning, like a father trying to show affection toward his daughter, buy into and propagate the longstanding limited narrative.

Many thanks to Vallie Lynn Watson at BLIP (formerly Mississippi Review)who published “Tomorrowland” online last summer and kindly passed it on to Susan Swartwout at Big Muddy, who generously has included it in issue 10.2.