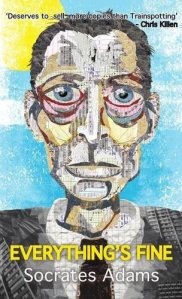 Released at the beginning of the year, Everything’s Fine by Socrates Adams is a thrilling debut novel. Published by Transmission Print, Adams’ novel fits squarely in the ‘alt-lit’ scene. It’s a tribute to the independent publishing world as Transmission is a one-man outfit that only produces one book per year. If they continue to select books of this quality, then they’ll surely be around for a while.

At times full of self-deprecating humor and riddled with doubt and other times full of poignant beauty and wit, this is a solid contribution to the burgeoning alt-lit scene that has exploded in recent years on the internet. Images of Donald Barthelme wrung through my skull as I devoured this relatively easy, yet utterly rewarding, read. It’s also comparable with some of Tao Lin’s fiction on the most surface of levels (namely the sparse prose, short sentences, and repetitive, lyrical quality) but, upon closer inspection, I believe Adams grounds his text with more of a human touch, breathing life into his characters, thus giving them a more three-dimensional feel.

The narrator, Ian, is a hapless man, a modern take on the everyman. Partially as the result of outside forces, such as his demeaning job selling tubes, and his own insistence on leading a fulfilling life in an otherwise purposeless day-to-day existence, make for an intriguing character sketch.

His main job is take a tube home with him and look after it, something his boss, the man who demoted him to the position of “Tiny Shit Head.” He soon names it Mildred, and becomes increasingly obsessed with its care. Paranoia meets the mundane the quirky is thrown up against the unremarkable and the result is a richly textured novel that is about much more than Ian’s daily struggles.

The dream of a holiday spent in the French/Italian Alps continues to appear throughout the book, almost serving as Ian’s guiding light, his main reason for existence, a chance to escape his boring work life that is slowly consuming.

At the core, I suspect, is the fight to carve out a special nook of humanity in an ever-increasingly sterilized world. The market has seemingly already been corned in literature about the alienated urban male, yet Adams’ provides a fresh view by linking it with the irrationality of corporate ambition. Ian, for all of his idiosyncrasies, is the perfect conduit for this message as his intelligence and humor shine through and become relatable despite some of the more absurd sections of the book.

For me, the same things that make this book on the verge of greatness are the very things that keep it grounded, weighed down merely as a solid first offering ripe with potential. The repetitive style of many of the sentences, often told, in short, spare sentences, left me in a bit of a trance part way through the novel, almost lulling me to sleep. But, by the end, it’s clear that this is the author’s intention as it reflects Ian’s monotonous life.

Splitting the narration between Ian and Mildred, by reversing the lens through which this tale is told, allows Adams more freedom to delve into the comic undertones of the tale while not forsaking the more serious sections. As with most successful black comedies, there is tenderness underneath Adams’ bountiful wit and sarcasm, barely visible at first but gaining power as the story unfolds.

Maybe the best way to describe the book is to take directly from it, to heed its advice that “All human interaction is sales.”

The epilogue, more specifically, the final few lines, delivered a feeling that had been bubbling just under the surface for the entirety of the book. “Like a dream, my existence continues. Perfect, unchanging. No beginning, no end.” Simple yet insightful, its clarity in message and tone sums up the book in way that hints at a methodical plan. One that is executed almost to perfection throughout as the reader is sucked in to Ian’s world only to be spit back out again at the end, left wondering about their own existence, and the ultimate value of it.

Everything’s Fine is a sophisticated novel and highlights Adams as a talent to watch. It’s not everyday that I come across a debut novel that is so sure of itself, so comfortable in its own skin. The refreshing quality of a young author maintaining his vision throughout the text, to create an overall entertaining and thought provoking read, is a rare gem nowadays. I’ll definitely be on the lookout for his sophomore offering.—Patrick Trotti

One response to “REVIEW: Everything’s Fine by Socrates Adams (reviewed by Patrick Trotti)”