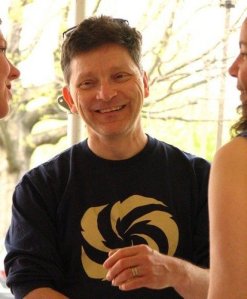 A French toast addict, a native Washingtonian, a poet, a writer, and a teacher of fiction at the Johns Hopkins Advanced Studies Program who has won the “Award for Teaching Excellence” in 2010-2011, Richard Peabody is one of the hardest working writers and editors in the business. His new poetry collection, Speed Enforced by Aircraft, is due from Broadkill River Press by year’s end, and his new short story collection, Blue Suburban Skies, is now available at booksellers everywhere. In today’s jmww blog, he chats with writer Rosalia Scalia about Blue Suburban Skies:

Rosalia Scalia: Many of these stories—in my mind—echo Cheever, especially in the stories about family from the male p.o.v.  Is this purposeful? Would you credit Cheever as a major influence, and if so, why. If not, why not?

Richard Peabody: I loved “Bullet Park” and a lot of his stories, particularly “The Swimmer” and “The Five-Forty-Eight,” but I don’t consider Cheever a particular influence.  I’d say there’s more than a pinch of T. C. Boyle and a dash of Tom McHale in there.  But no, I didn’t consciously set out to emulate anybody in particular. But then I’ve read a lot and tend to like a lot of more obscure writers.

RS: It surprised me that Renfro, afraid of not being able to measure up as a good father, parallels Dixie’s fear of not being able to cope with her husband’s increasing ill health. Both fear similar things; both flee their fears, but only Renfro faces it with Dixie’s help. It seems that Dixie and Hayley are cast as healers although Dixie is unable to heal herself. Did I read that correctly, or did I miss something?

RS: All of these stories convey a quiet humor about family and about neighbors. I laughed out loud so many times and found myself reading some of the stories again, from the beginning. In “Blue Suburban Skies,” for instance, the irony and twist of the dad and the neighbor smoking the poorly rolled weed found in the son’s drawer. Is the humor something you aimed to do—something that just evolved in the process writing.

RP: I aim for yucks a lot of the time in both poetry and fiction. Even in my darkest stories I pull the old one-two of something funny followed by something more powerful. (That’s one of the things I love about Carl Hiaasen’s novels.) I struggle to make something stick in your synapses.

RP: Thanks.  I’d say Eddie is an amalgam of writers I have met through the years. Wyatt has more in common with me but is pure invention. I’ve been revisiting some of my characters and I think both Eddie and Wyatt have more scenes to play in my work.

RS: “Gunpowder Divertimento” offers an unexpected twist at the end—a delightful and funny turn of events as does “Still Life with Bunsen Burners.” Can you talk about how you arrived at the twists in each story—were they something you worked toward or the result of the alchemy of writing?

RP: “Gunpowder” began with place and evolved from there. That strange book store really existed in Merrifield, VA. The rest is alchemy. “Bunsen Burners” began with a visit to that public park in Charleston. The what-ifs built from there.  I guess I am strongly influenced by place, by setting. My mother’s from Lexington, NC, and Miss Crystal grew out of all of those hot summer nights where I eavesdropped on adult conversations down south. But all of the stories you’ve mentioned so far are mainly character-driven. Actions = consequences, one way or the other. “Gunpowder” could have gone very badly for Edgar. Sometimes dumb luck saves us from our bad intentions.

RS: Many of the stories seem to pock gentle fun at the absurdities inherent in modern life and social pressures and expectations, but in such a loving way. Is this social commentary a happy accident?

RP: LOL.  Nope. By design. A lot of my characters are kind of sad-sacky, self-deprecating folks. Sometimes they win by accident, sometimes they lose.  Even when we think we’re in control we’re usually delusional. Don’t you think?

RS: Which writers would you list as your greatest influences?

RP: Easier for me to do re. my poetry. When it comes to fiction, your guess is as good as mine.

I love a lot of writers and their work. But I was surprised when somebody wrote a Wikipedia entry on me and declared that I owed a lot to Ken Kesey. In my dreams. I don’t see that we have much in common at all save for having both been wrestlers. So, I’m open to any reader’s nominations where that question’s concerned. I can’t play the guitar as well as the people who make the music I love the most, nor can I write as well as the author’s I love the most, either.

RS: What do you want readers to know about your stories?

RP: I like to push the envelope as far as it will go in terms of the reader’s imagination.  Even in relatively straight narrative I will go for the oddball moment, the missing link. My work begins in the particular and ends in the universal. At least that’s what I attempt.

You can order a copy of Blue Suburban Skies here: http://www.mainstreetrag.com/RPeabody.html

Rosalia Scalia writes both fiction and non-fiction She earned a master’s in writing from Johns Hopkins University in 2003. Her fiction has won several awards and prizes, and has appeared in numerous literary magazines, including Amarillo Bay; The Baltimore Review; North Atlantic Review; Pebble Lake; Pennsylvania English; The Portland Review; Quercus Review; Smile, Hon, You’re In Baltimore; South Asian Ensemble; Spout Magazine; Taproot; and Willow Review, among others. She lives in Baltimore with her cat. Her website is www.rosaliascalia.com.