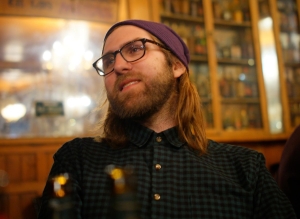 In today’s ORIGINS, Kevin Krause talks about the inspiration for his poem, “A Weighing of the Heart,” which appears in the summer 2013 issue of jmww:

It wouldn’t be surprising to anyone to say that a poem sprang forth from the tip of a pen, but in the case of “A Weighing of the Heart” the statement couldn’t be more true. About a year ago I took up the hobby of collecting and restoring old fountain pens, and upon the recommendation of the enthusiastic community of hobbyists sprinkled about the Internet I settled on Noodler’s brand ink. So, with pen and ink in hand the only thing left to do was write. My inspiration would be the illustration of a catfish on the bottle of cloudy black liquid that sat before me on my desk.

For the uninitiated, noodling is the art of catching catfish with nothing but one’s hands and natural might. While popular depictions include such TV shows as Hillbilly Handfishing, I took it upon myself to give the sport a classier treatment. Of course, catfish leads to cat, which in turn leads to the traditions of the ancient Egyptians, and as with most poetry one thing naturally led to the next in creating the final piece. I’m still not quite sure what Osiris has to do with catching catfish by hand, but something tells me there is a connection there.

And, because the poem begs the question, it was penned before the term ‘catfishing’ entered popular parlance to reference the act of creating a false identity online to lure in would-be lovers. Sorry Manti T’eo and Nev Schulman, but — as much as I wish it did — this poem is not speaking to your unfortunate gullibility. It’s about trawling, not trolling.

Kevin Krause is a graduate of the University of Baltimore’s MFA program and author of “flora / fauna.” Follow him on Twitter @youdontknowkev.