According to Wikipedia, parallax is a displacement or difference in the apparent position of an object viewed along two different lines of sight. The essays contained in PARALLAX reflect the same displacement. While the shift can be uncomfortable or jarring or even unrecognizable, a new reality is created from the old.

I was just a kid, sitting at Croco-Burger in the port city of Douala, Cameroon.  My dad was across the table, eating a hamburger and fries.  The car alarm went off.  Suddenly I was running across the street with a mob yelling, “thief!” at the top of our lungs.  There was a tussle in the middle of the road.  Cars honked and swerved.  Headlights flashed.  We ran down an alley way.  Somebody grabbed the skinny kid and started beating him with a strip of rubber or an extension cord or something.  I don’t know what happened to him after that.  I went back to the restaurant and rejoined my dad where he sat, still eating his fries and looking not too pleased. 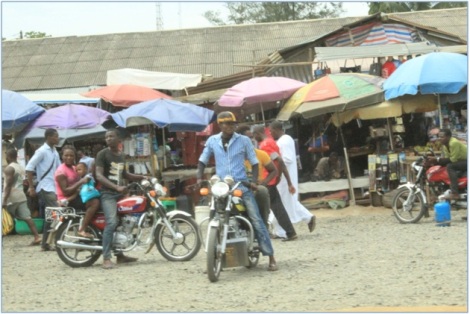 I don’t know what happened to that guy after that. But now, decades later I’ve got a good idea of what might have. There’s a horrible YouTube video called Aluu 4 of people getting burned alive in Nigeria after being accused of stealing electronics. Don’t Google it. The video was taken by someone asshole with a camera phone. He stood and filmed the whole process–his buddies throwing tires around the necks of naked kids, bleeding from their heads. He got up close so you could see all the details as they doused the tires in gasoline. I couldn’t watch it for more than a minute, but it went on for seven or eight. There’s even a video called Allu 4 Two. It must have been too long to upload all at once.

I saw a necklacing one time myself earlier this year, after lunch one day. We ate delicious banga soup and pounded yam with fish in traditional clay bowls, burning our finger tips in the bubbling sauce. While we were eating I had a heated argument with a pastor about the story of the Good Samaritan. My contention was that Jesus was obviously making the case that God didn’t give a hoot about our doctrinal beliefs one way or the other. The pastor disagreed. He thought Muslims needed to agree in their brains that Jesus is divine, in order to be in God’s in-group. I felt pretty strongly that Jesus probably didn’t think so, given that he told that story in response to the question of what one must do to be saved. It seemed pretty incontrovertible to me that the pastor was dead wrong about that. Samaritans were understood by Jesus’s audience to be doctrinally “incorrect” after all. Anyway, we argued heatedly for a while then it was time to get back to work. We were driving around the roundabout and there he was, legs charred positioned by rigor mortis as though pedaling the air, the tire around his torso smoking, everybody still standing around. “That’s a human being,” my colleague said, fumbling, trying to snap a picture with his Blackberry as we drove past. But his battery was dead.

When you’re a kid you don’t think about things like effectiveness and legitimacy of police and judiciary as determinative of the level of mob justice and vigilantism in a particular society. You don’t think about abstractions like the sociopolitical context. I didn’t think much about the Cameroonian presidential election in 1992, aside from watching helicopters dropping teargas on the city from my school window and avoiding town during political rallies and demonstrations. The old man originally came into power in 1975 as Prime Minister. He started winning single-party elections in 1984. In 1992 he won Cameroon’s first multi-party presidential election with 40% of the vote. He won again in 1997 with 93%. He won again in 2004 with 71% and most recently in 2011 with 78%. He’s been around a real long time. He’s number one on Wikipedia’s list of longest ruling non-royal leaders. Anybody who served longer than him (Castro, Kim Il-sung, Tanumafili II, Bongo, Hoxha, and Franco) is dead.

But these factoids aren’t very interesting when you’re a kid, which is what I was when I lived in Cameroon. When you’re a kid you don’t check Politico and Twitter twenty times a day. You exist entirely in the private sphere where human beings live. You think about people you love and things you touch and see. You think about thunderstorms: palm fronds whipping and ripping in wind, dark ropes of thick cloud twisted across sky, rain pounding on the world, rivers of mud gushing in ditches, ball lightning hovering for a moment out across the basketball court and then vanishing into the past.