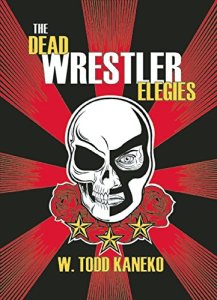 Professional wrestling has long been a secret pastime, a form of entertainment often enjoyed by those comfortable with being entertained in solitude – or, better yet, those with thick skins. Since its early days as a carnival attraction, professional wrestling’s “legitimacy” – or lack thereof – has been its defining characteristic; it is a “rigged” sport, an exhibition where the outcomes are preordained, and therefore unworthy of the serious contemplation given to, say, baseball or college football. Wrestling has never had a real foothold in the literary community beyond occasionally-successful memoirs like Mick Foley’s Have a Nice Day! (and even those rare successes are greeted with backhanded compliments or dismissive shrugs). Todd Kaneko’s recent collection of poems, The Dead Wrestler Elegies, changes that, taking full advantage of wrestling’s metaphoric potential and lending to the much-maligned “sport” an artistic legitimacy it has been desperate to achieve for nearly a century.

In The Dead Wrestler Elegies, Kaneko embraces the faux-machismo, the overly defensive nature, of professional wrestling and its stars, and uses these contradictions to explore the relationship between a son (the speaker) and his father (often the subject of the poems). The speaker’s mother abandoned the family when the boy was young, leaving his father a sad and broken man, and the son unable to connect with his remaining parent outside of their frequent wrestling viewings. After his father’s death, the speaker reflects on their collection of wrestling tapes, finding his own history amidst the fake elbow drops and bombastic ring entrances.

Kaneko’s poems erupt like pyrotechnics during a main-event entrance, their lines as striking as a superkick. In “Sputnik Monroe,” the speaker compares his parents’ marriage to his own:

Some nights, as my wife sleeps upstairs,

I watch my father’s video tapes and

imagine what I would have done that day

if I knew that my marriage depended

on what I did with my hands.

In straightforward language, Kaneko introduces readers to a sympathetic and engaging family history, but always makes sure to keep the connections between the speaker’s personal narrative and the symbolic nature of professional wrestling strong. While many of the poems feature similar structures and colloquial language, at times the poems are elevated by more repetitive forms, more reverent vocabulary. In “Long Live the King of Hearts,” Kaneko uses the litany of “Because…” to raise Owen Hart – a wrestler famous for falling to his death from the rafters of an arena – to the level of hero, even martyr:

Because a man must do the job he is given.

Because there is no such thing as flight, only desire

for freedom from home.

Because my father claims to have seen the Blue Blazer

fall that night on television, his head snapped

back like a man who has just lost everything.

Because he wanted something to talk about with me

those nights we sat together watching wrestling.

Because there is no such thing as falling, only belief in flight.

Later in the collection, Kaneko devotes a poem each to Andre the Giant and Giant Baba, two larger-than-life performers whose lives have expanded into mythology. While these poems share humorous anecdotes and nearly deify their subjects, they also relate to the ways in which professional wrestling has become a kind of mythology in and of itself for the speaker. It does not matter that Andre the Giant didn’t actually scale “the Empire / State Building with Marilyn Monroe / in one hand, Cleopatra in the other” – what matters is that, especially to those who saw him as children, Andre the Giant seemed that large and powerful. And even though it’s true that professional wrestling is fixed, it does not matter to the speaker; what matters is that, for he and his father – and for countless readers Kaneko’s age and younger – professional wrestling was truth.

One response to “Review: The Dead Wrestler Elegies by Todd Kaneko (reviewed by Sean L. Corbin)”