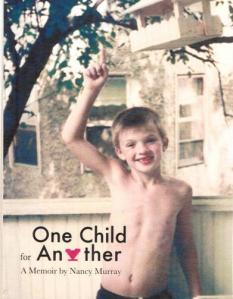 One Child for Another

Let’s get this out of the way first, because reviewing this is challenging:  yes, One Child for Another is a good book. It’s also troubling, because it’s a troubling story. And  it’s also lovely and hopeful. In short, One Child for Another is what memoir should be, difficult and easy, full of darkness and growth, easy to read and hard to digest. It’s a lot like life in that way.

If it’s not easy to read and review One Child for Another, imagine the difficulty in writing it and more, of living the life that breathes within its pages. The story of how memoirist Nancy Murray took control of an out of control life and gave a chance to the life within her is a powerful one. While it is often a funny and joyous read, it is threaded throughout by the reality of darkness within a regular suburban family. Reading it, we understand who Nancy was and how she became the woman she is.

Within the first few chapters, we know the outline of the story: pregnancy as a result of sexual assault (at the least), an abusive father, a passive mother, a decision to give a child up for adoption. The 80s were not that long ago, but it was still a time when were still “sent off” to take care of their little problems. Given that setting, it’s easy to imagine a tragic, miserable story. But that’s not what’s given. Instead, what destroys some, empowered Nancy. The difference between her story and others is that she chose to be other than a victim.

Telling too much of Nancy’s story would give away too many of its pleasures. There are colorful characters (nuns), amusing anecdotes (some involving nuns) and touching moments as the arc of Nancy’s pregnancy develops. And we follow the pregnancy the whole way, from conception to birth. The focus of the book is narrow and all the stronger for it.

There are many, darker directions One Child for Another could have gone. It could have followed the thread of abuse and dysfunction that haunts the back story. Instead, Nancy shines light on the story of her choice, her son Dillon and the experiences leading to a closed adoption. Would exploring the fullest depths of abuse have been a strong choice? Maybe, but that would have made this a different story. Instead, we know just enough of the background to understand Nancy’s choices and decisions.

When we judge memoir, we often talk about how powerful the story is, how brave the author is to exhume the damaged bones of life. But where is the line? At what point is the Rubicon crossed and the story become sensationalism? Murray wisely knows where the line is and sticks close to her chosen story, that of a girl faced with a common problem who makes uncommon decisions out of necessity. One Child For Another is a brave, powerful story, all the more so because of its chosen focus. It doesn’t dwell on the ghoulishness humans are capable of, though it acknowledges its existence with a steady gaze.

While we praise the integrity and honesty of  personal stories, we often forget to focus on the quality of the prose. That the story is a powerful one is important, but every tale is better when the words behind it shine. How can we tell our story if our words are mud? Luckily, One Child For Another is a marvelously well-told book. Candid, humorous, honest and affecting, reading it is almost like having a conversation with Murray over a cocktail. Her voice is clear and strong, the language simple but never plain. It flows easily, lingering when it needs to over truths and thoughtful digressions. Putting it down is difficult and unnecessary.

Why do we read memoir? Why should we read One Child For Another when its subject matter is troublesome? Because difficult stories are the most important ones and because voices that were quieted need to be heard. Nancy Murray’s voice is a unique one, full of acerbic wit, honesty and anger, joy and hope and One Child For Another tells a story that needs to be told.

2 responses to “REVIEW: One Child for Another by Nancy Murray (reviewed by Michael Tager)”