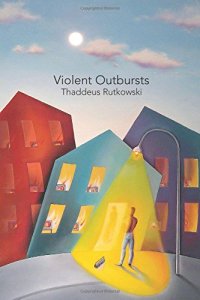 Novelists who write flash seem to make different flash than poets who write flash. There’s the tug of plot, as opposed to merely sustaining an image. There’s the problem of characters engaged in dramatic conflict inside of a lyric form. Novelist Thaddeus Rutkowski’s chief accomplishment in writing the flash collection Violent Outbursts is how he writes against his nature to create a saga of his own essence. While each story stands by itself, these linked flashes are meant to be read as a whole. Think, 100 panels of the artist as a young man.

Rutkowski, whose soft-spoken voice nonetheless rides an electric rail, doesn’t begin in the middle. He begins in the beginning because the beginning is just a middle without disguises. In “Pigeon Landing,” one of the most ordinary of birds lands on the very uncommonly-shaped head of a six year old Rutkowski: “The pigeon landed squarely because my head was square, or more like a cube. There was a flat area on top just big enough for a medium-sized bird to land on, without falling off.” Rutkowski is open to alternatives. He provides scenes which make it clear that we are looking at experiences that could have been caused by anything, no matter how serious or ridiculous. And yet, in his chaotic flash, nothing is an accident. No matter how unexpected or unpredictable, everything has an explanation too often located in our blind spot:

“Or maybe it was just how the pigeon saw my head. The pigeon might have had square pupils in its eyes…The bird didn’t need a runway, warning lights, or radar; it just needed to find a 6-year-old with a square head, suitable for a soft approach.”

One of the nice patterns in these stories is how they constantly shift between indoors and outdoors. Alone in a house isn’t quite the same as alone in the world, and the back and forth between comfort and discomfort is both soothing and restless. At times the outside comes inside, as in “Philco,” about his family’s television set which only picked up two channels. The little chip on young Thaddeus’ shoulder was that even if he watched both channels all day he’d miss a third of the programming, such as Batman. One night, a lightning bolt “entered the antenna wire, shot through the box and sizzled in a huge spark between the bottom of the set and its table. I was on the sofa, watching a show…I just stared at the small ball of light until it burned itself out.”

There is so much of the unexplained topsy-turvy in life that Rutkowski the character can be very engaged, but very passive at the same time, like young Marcel Proust. In “Pet-Food Dishes,” three children eat from three bowls at the table while three dogs fight over three bowls on the floor. The scene is parallel in its binary opposition. He writes: “We would just sit calmly at the table while the pets fought for their food on the floor.”

Speaking of floors, and floorplans, and architecture, Rutkowski—whose handful of mates in the 1977 Johns Hopkins Writing Seminars (fiction) class included the luminaries Mary Robison, Frederick Barthelme, and Moira Crone—isn’t shy about taking a few smacks at the idea of needing “scaffolding” in a story. What to make of a story of continuous loops? The motion is all one needs to be happy. But having an older, learned consciousness means you “couldn’t get really crazy.” Rutkowski in “On the Stairs,” shows his preference for the haunt over the house. Elsewhere, in “Our Basic Outhouse,” he confides, square head notwithstanding: “I felt like I was different, having this architectural element in my back yard. None of the kids who lived in town had outhouses.”

Rutkowski writes more like a dreamer than the master distiller of words he truly is. On the one hand, everything happens for a reason. On the other hand, the reasons are preposterous. “All I could do was mope, and wallow in dark moods…I didn’t even win a high-school science fair prize because I was too depressed to participate. I couldn’t create a poster showing cause and effect, margin of error, and standard deviation, because I was too busy being a deviant.”

I love these moments in Violent Outbursts when what is perceived as lacking, such as judgment, is actually the blessing. His lack of judgment is what saves him, even if it results in losing some stupid prize. Rutkowski also has a gift for using humor in a way that doesn’t speedbump the narrative. He isn’t trying to be funny as a way to avoid a more honest compulsion. In “Eleven-Dollar Ride,” he writes: “I take a private bus from my home to my office. A one-way trip costs $10, payable to the driver. I have only a $5 bill and a $6 bill, so I give them in payment. The bus driver doesn’t have $1 in change…” and so on, in a piece who’s ending will reach its hands into your eyes and yank out every stored up sadness.

Perfectionists may find a few pieces in Violent Outbursts to grump about. A number of these have been previously published as singular pieces which might explain Rutkowski’s fetish for having specific on-ramps and off-ramps to get in and out of each flash. And it’s true, Rutkowski is at his best in the middle parts where his voice is striding along. Although his distinct phrasing has been around a while now, Rutkowski doesn’t make the mistake of someone like Billy Collins who often caricatures his own “voice.”

To paraphrase my brother-in-law Mark, I loved this book even when I didn’t like it.

One response to “Review: Violent Outbursts by Thaddeus Rutkowski (reviewed by Barrett Warner)”