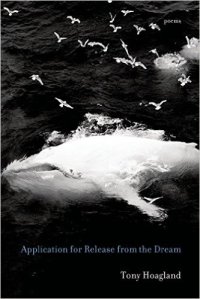 Application for Release from the Dream

Tony Hoagland, as he himself said in a recent interview, is a poet who began writing sharply introspective autobiographical poetry but who more recently has aimed his poetry toward issues of social concern.  Always funny and brutally honest about himself as well as our problematic society, Hoagland in the last five or so years has written some of the most spot-on, take-down, and laugh-out-loud poetry about our 21st century public life.  What are the mores of our public life, how we act when out and about?  Well, the title poem from his chapbook sums it up . . . sort of.  There, the narrator’s wife turns to narrator during breakfast one day and mentions that when she swims in the local community pool, she screams underwater.  The narrator, in the funny way characteristic of these lyrics, is taken aback by the off-handed way this intimate bombshell is dropped, ie, big private news over eggs and toast.  It’s as if his wife doesn’t even want a response, or to be comforted, held, or to discuss.  She will just go on, after the poem closes, swimming her twenty laps while screaming underwater in the community pool.  This is the type of silence, the dialogue beneath the dialogue, that Hoagland’s Don’t Tell Anyone, which is included in the larger collection Application for Release from the Dream, both books seek to address, uncover, and move into the sunlight of articulate speech.  Hoagland’s poems are discussion starters.  Whether as direct addresses to the reader, or to someone off-stage, or in monologues overheard by the reader, these poems engage.  Don’t tell anyone, but this is necessary reading.  Like medicine, these poems are a bit bitter.  They open eyes wider.

Hoagland is a writer of artful, free verse poems: In an ostensible autobiographical voice, he leaps from image to analogy that is grounded in everyday life, while zooming to wild yet accurate associations. He moves quickly from image to image, using the simile form of comparison, sometimes in off-putting, funny, disharmonic ways.  This heightens his free verse and makes it fun and provocative.

Has Hoagland written Howl for the 21st century everyman and everywomen?  Hoagland’s characters, and probably his audience, consist of those who have stayed with a job, value a safe place to live, maybe raise a family, or proceed cautiously, compared to Allen Ginsberg “starving hysterical naked” escapades across rooftops, in loony bins, at universities, and on road trips across America with “angelheaded hipsters burning for the ancient heavenly connection to the starry dynamo in the machinery of night.”  Hoagland’s characters have that same yearning.  Yet, they live much more regulated lives.  So, the answer is most likely yes, because Hoagland addresses the same concerns that Howl addresses and in many ways which T.S. Eliot’s The Waste Land too addresses; that is, the still persistent dysfunction of modern, technological life from the perspective of our beating, demanding, longing human hearts.  Unlike Eliot and much like Allen Ginsberg, Hoagland places the blame for some, but not all, of contemporary dissatisfaction in the culture’s craze for getting lost in an artificial, consumer life style.  We increasingly live in a human-made wilderness of chain stores, chain malls, chain housing, and chain hobbies and pastimes.  Hoagland, unlike Eliot and Ginsberg, writes in a plain style, though with a whimsical eye for analogies that feel both oddly juxtaposed and hilariously just right.

Hoagland’s chapbook Don’t Tell Anyone fits this modus operandi and takes place at the kitchen, big box store parking lot, on an airplane, sidewalk, in the suburban sprawl of Houston, in the staff cafeteria of a nursing home, in a beach side Florida resort, and during Saturday shopping.  This is his third chapbook from Hollyridge, a California small press.  The first Hard Rain, named after the famous Bob Dylan tune, announced Hoagland as fierce and funny social critic, one who uses a food-court mall to talk about American diversity, or why abstract art appeals to corporate board rooms precisely because it says nothing and offends no one while corporate leaders meet to discuss how to drive wages even lower.

A number of poems here challenge the relationship of contemporary society with nature by showing just how much modern society erases nature, replaces starlight with streetlights, as in the poem, “Because This is Houston.”  We obscure our own human longing as we channel it into the fleeting satisfaction of shopping, as in “Summer.”   We drown out ocean sounds with booming radio music as in “Her Majesty,” replacing the world with our own imaginative products, until we are cut off.  Meanwhile, the narrator of that poem, who affords a beach house, tries to reconnect with what does in fact salve his longing, that is, absolution in the infinities of ocean and night.  This vastness is welcome humbling, the poem’s tone implies.   Meanwhile the narrator stews at the kid with the obnoxious sound-system and wishes the kid crash his jeep, which is why Hoagland is not preachy but funny.  Hoagland’s poems show by telling stories, not by providing the analysis, which as a critic and reviewer is what I am doing here.

In the “Social Life of Water,” Hoagland contrasts the isolated feeling of a person who feels isolated with the sharing, streaming, braiding, running porousness of water.  In the “Wine Dark Sea,” which harkens back to his earlier work, a narrator in the voice of Hoagland visits his father, while as a son, irritated and territorial of his own personality, and ready to argue even before arrival.  Not a happy family visit, for sure.  Nevertheless, Hoagland’s poem is a useful mirror, a painful one.  I liked the poem “Bible Study,”  as a lonely salesmen narrator moving from motel room to motel room finds salvation out of his almost unbearable loneliness.  This paraphrase doesn’t do that poem justice.  The poems here, while showing and not telling, have obvious messages.  Like the French poet Baudelaire, for instance, Hoagland is very funny when critiquing and rejecting ‘modern life.’  Unlike Baudelaire’s ironic anger that often hides his viewpoint, Hoagland’s irony is dramatic irony that shows what his characters can’t see.  We can see it as readers and so get the message.  Also unlike Baudelaire, Hoagland sees himself as part of society he critiques, a reluctant insider.

Hoagland’s Application for Release from the Dream includes these poems and more, in the poet’s fifth full-length collection.  While still being a book that addresses social problems, the expanded Application is more personal, elusive, and mysterious.  Difficult to review, Application for Release from the Dream showcases characters and the narrator in moments that reveal the odd shapes of inner emotional life.  If Hoagland has a moral imperative to impart, so to speak, it is to drive the reader to consider what he or she feels, what drives him or her?  If society is dysfunctional, these poems detail that of course, and yet in addition, focus more on exploring what inner movements lie below our distorted public surfaces.  Application should be a contender for the Pulitzer Prize, both for its artistry and its important timeliness.  As I said, don’t tell anyone, but Application for Release from the Dream is required reading for who those in the know, and not in the know, about the emptiness of our consumer society, and the richness of our humanity.  Turn television and Internet off, turn yourself on.  Hoagland has written accessible, funny, biting life rafts to sail back home.  Let’s go.