In today’s ORIGINS at jmww, author Daniel Falatko discusses the origins for his novel Condominium, published May 14, 2015, by CCLaP Publishing.

The complete vision for Condominium came to me when sitting on the L Train one day and overhearing these two dudes with glittery high tops making fun of the banks of glittering condo towers being constructed up and down the Williamsburg waterfront. They were riffing on the bland types of people who would be populating these buildings. Stroller people. Day traders. Upper Manhattanites. The types of people who should be quarantined and regulated to an area far from DIY music venues and illegal artist spaces. My initial instinct was to agree with them, and I had been guilty of similar jive in the past, but something about their basic generalization of an entire sub-population irked me that day. It really got the wheels spinning. I mean, yes, these khaki masses flooding into those glass and steel prisons are certainly among the worst types of white people, but can you really just call for their mass execution just because they may not know who Animal Collective is? Doesn’t every individual who has ever walked this Earth have complex inner dialogues and interesting hidden angles and things that haunt them until the day they perish and beyond? Don’t forget, these people are at the top of the game. They have a lot to lose and blood on their hands. Their demons are most likely WAY more plentiful than those two kids on the train trying to remember if they had showered that afternoon and, if not, then does it even matter, maaaaaan? So can you really write the condominium owners off as bland and uninteresting as a whole?

That’s where Condominium came from. The idea was born on the L Train somewhere under all those concrete shoe bodies and the black, polluted water of the East River. The idea was to write a novel from inside the minds of the gentrifying invaders. It’s a strange concept to view these people as underdogs, but in a way they are. They are stereotyped and put down just like the rest of us. “All people are interesting,” is what Condominium is telling you. “Even the ones you don’t like.” And yes, people really, really hate these characters. At least one major agent backtracked on signing up the novel because said agent’s interns threatened to walk. This is how much they hated Charles and Sarah and the gang. As I’ve always said, the visceral reaction certain types of individuals have when confronted with these characters is a good thing. I didn’t want to sugarcoat them for those two dudes on the train. I wanted them to be the real deal. People tend to romanticize Vikings, for example, pointing out their cool mythology and putting them in the role of romanticized outlaw. But try telling that to some coastal farmer back in the day having his lungs ripped from his chest cavity after having just watched his wife and children be stomped to death. This is the type of horrified reaction people have for Charlie and Sar Bear, and all they’ve done is moved into a damn Condo. 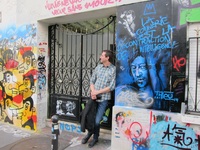 These are modern urban Vikings. Invaders. The gentrifying hoards. The death of a once great city. They are the exact people those kids on the L Train mercilessly mock but secretly fear and envy. The idea that came to me on the train was to crawl into their headspaces and what was left of their souls. I wanted to show people that multiple realms unfold within every individual’s psyche, that people who can afford a million-plus condo have an even greater number of devils to scurry from than you do. They have more pressing matters to worry about than which warehouse party to hit that night. To put it succinctly: They are more interesting than you are in most ways.

So if you hated Condominium, then you should track down those two dudes on the L train and have a word with them, because they are the true origin of the novel. Their heads are faded on the sides and floppy on the top. At least one will be rocking lenses-free frames. By some sort of smoke and mirrors or straight out magic their jeans will be simultaneously skin-tight and baggy. And the real giveaway will be the glittery high tops. The kind that middle school kids in the mid-00s rocked to try to look like Soldier Boy. Those two dudes are the source. I know this doesn’t quite narrow it down, considering 91% of dudes under 27 in North BK look like this, and I wouldn’t advocate just going out and swinging on random Williamsburg people, so it would be best not to bother. The true origin would be hard to track down.

Besides, they’ve probably moved to Portland by now.