In today’s ORIGINS at jmww, author Michael Landweber discusses the origins for his novel Thursday 1:17 pm, which published May 2016, by Coffeetown Press.

Although this is an essay on the origins of my new novel, Thursday 1:17 pm, it might end up being more appropriately titled revisions. I suppose we could go with ressurection, although that’s a bit messianic for my taste. Really, this is about the two Origins of this particular book.

Honestly, I can’t pinpoint the moment that I had this idea. But all my work – novels, short stories, whatever – starts with the idea. Usually a very strange idea. When I have these ideas, they are followed by an intense conversation with myself about why this particular concept will probably lead to anguish and heartbreak.

Here’s roughly what that conversation for Thursday 1:17 pm sounded like:

Me: No, you’re gonna love this one. You see, time freezes and there is only one person moving around and that person has no clue what happened or how to fix it.

Me: So you want me to write a novel with a single character and – let me get this straight – a world where there is no possibility of interaction with other characters. Because they’re all frozen in time!

Me: Um, well, yeah. There could be flashbacks?

Following that conversation, I, of course, decided to write the book. That would have happened sometime in 2007. The book came out in 2016. 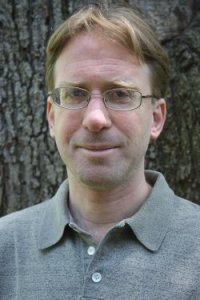 Once I have a concept, I generally turn to character. Who is the person who I’m going torture – I mean, expose to this unusual situation? For Thursday 1:17 pm, that meant putting a person in a familiar environment that had become, in an instant, completely foreign. The character would have to deal with alienation and loneliness. It would be a unique type of isolation – everyone who the character could engage with would be right there, present but impossible to reach. The symbolic and thematic possibilities of that intrigued and scared me. That’s always a good combination for me to start a project.

The narrator, as is always the case, started to tell me who he was. He was a 20-something recent college grad kicking around Washington, DC. Even before time stopped, he was aimless, stuck in his own rut, not really connected to the world anymore. This first-person narrator didn’t even have a name. That should have tipped me off that I had a problem.

But I was off and running, with my slightly depressed loner of a narrator leading the way. The journey was not pleasant. The tone quickly turned dark. Bleak. Pitch black. Now, I don’t have a problem with exploring the darker side of humanity in literature. Actually, I tend to gravitate toward it. But my narrator, unshackled by any social pressure or authority on his behavior, became more nihilistic and irredeemable. It was quickly becoming Crime and Punishment, without any threat of punishment.

It took many years and multiple drafts for me to realize that I was writing the wrong book. As a writer, that’s a pretty crappy moment to have. I did want to explore what would happen when a person is no longer subject to basic societal constraints. What does a person do when there is no threat of getting caught, when there is no one watching. But I needed a character who would at least have an internal moral compass that could balance the allure of this absolute freedom.

So a couple of years ago, I started over. A new origin story. Take two.

I knocked five years off the narrator’s age, gave him a name and let him loose on the story. He was now a 17-year-old nicknamed Duck. He had just graduated high school and it was the day before his 18th birthday when the world froze. As long as time was stopped, he would literally be unable to become an adult.

It was still dark. Duck’s mom had died after a long bout with cancer the morning the world froze. His dad was in an institution. He still contemplates the consequences of voyeurism and suicide and violence in a lawless world. But the simple (though, as a writer, incredibly painful) act of recasting my main character gave the book a snarky attitude and an almost idealistic voice. Duck spends much of his time writing a guidebook for others frozen in time, an aspirational activity indicative of someone who believes there may be a way out of his current situation. Though he does let his baser instincts emerge, he also figures out how to transcend them.

So that’s the Origins story for Thursday 1:17 pm. I wrote two different books. The first version of the novel was all about resignation; the revision suddenly became about hope.

Michael Landweber lives and writes in Washington, DC. His short stories have appeared in literary magazines such as Gargoyle, Fourteen Hills, Fugue, Barrelhouse and American Literary Review. He is an Associate Editor at Potomac Review and a contributor for the Washington Independent Review of Books.