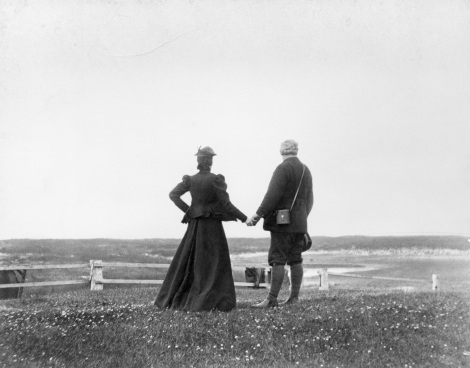 1. It shouldn’t be so hard to say hello. That’s the whole point of the word, right? To break the ice?

2. Urban legend has it that Alexander Graham Bell coined the “hello” greeting during the world’s first telephone call to his girlfriend, Margaret Hello. I guess he was looking for something to say once she picked up. Hello? I imagine him asking. Margaret Hello? Is that you? As if someone else could have possibly been on the other end.

3. When I call you, you don’t answer. Or you answer, but then you hear my voice, “Hello? Hello?” And then I hear, click.

5. Now that I think of it, your first words to me were “Hey there.” When I looked up and saw you, your Italian horn necklace, Jack and Coke fizzing with lime, I wanted to bolt. I thought I knew your whole story in those first seconds—West Philly, Madonna statue on the front lawn, chest hair for days. I couldn’t have known it all, though. I couldn’t have guessed.

6. The fact is, Alexander Graham Bell insisted that the word “Ahoy” be used as the primary telephone greeting. By 1900, he lost out to his rival, Thomas Edison, and the word “hello.” But Bell felt so strongly about “ahoy” that he used it for the rest of his life.

7. We sat barefoot, cross-legged on your front lawn, the plastic Madonna statue behind us. We devoured an entire bag of Chips Ahoy’s while Fourth of July fireworks blasted from city rooftops. Later that night—our first time. You loomed above me in bed and I saw it, too late to ask—the inky name engraved on your bicep. Lucille.

8. Mabel Hubbard was Alexander Graham Bell’s girlfriend, not Margaret Hello. So the urban legend is false, unless Alex was two-timing poor Mabel? Seems unlikely that a man who championed the word “ahoy” would be the cheating type.

9. Maybe if you’d been my winter boyfriend—long sleeves, dark nights. But you romanced me with summer snow cones, weekends in Ocean City. Lucille exposed by concert tees; Lucille covered in sand and surf bubbles. Lucille, the other woman, the temptress with the name of a geriatric librarian.

10. If you answer the phone and ask me to defend myself, I’ll say Lucille drove me crazy. I mean—Hello! Hallo! Holla! Hollo! You refused to explain.

11. I force myself to remember. That night I traced the loops of Lucille’s ‘L’s’ with my fingers while you slept; that night you swatted my hand away; that morning you left early for work and told me to stay, to sleep in, to hang out; that day I opened all of your drawers, cabinets, boxes until I found the photo albums; that photo that’s so obviously you and Lucille, labeled “Halloween 1997”; that cowboy hat that dwarfs your head and squashes your curls; that Patsy Cline hair flip that frames Lucille’s heart-shaped face; those bangs that highlight Lucille’s moon-eyes, those eyes aimed only at you.

12. The mid-19th century British word “hullo” is deceptive. It was not used as a greeting, but rather an expression of surprise, as in “Hullo, what have we here?”

13. You use a more slang-y version of “Hullo, what have we here?” when you surprise me and come home early; dozens of Lucille photos litter your bedroom floor.

14. According to the American Heritage Dictionary, “hallo” is a modification of the obsolete “holla,” as in Stop!

15. When you shout, the veins in your neck seem to stretch beyond the limits of your skin.

17. The Italian word “ciao” is used for both hello and goodbye. Other words with this dual meaning: “shalom” in Hebrew, “salaam” in Arabic, “annyeong” in Korean, “aloha” in Hawaiian.

18. The last things I remember: you saying that we were only a slim beat away from being something, a slim beat, a slim beat; tear streaks on your bulging neck; words no longer words; the slick surface of Polaroids on the bottoms of my feet.