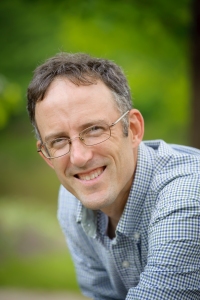 Three Men, a collection of novellas just released in September 2017 by Texture Press, is Nathan Leslie’s tenth book of fiction.  He is also the author of Root and Shoot, Sibs, and Drivers as well as The Tall Tale of Tommy Twice, a novel published in 2012, and the poetry collection, Night Sweat.  His work has appeared in hundreds of literary magazines, including Boulevard,  Shenandoah, North American Review, and Cimarron Review. Nathan was series editor for The Best of the Web anthology 2008 and 2009 (Dzanc Books) and edited fiction for Pedestal Magazine for many years.  He is currently interviews editor at Prick of the Spindle and he writes a monthly music column for Atticus Review.  His work appeared in Best Small Fictions 2016.  Check him out on Twitter and Facebook as well as at www.nathanleslie.com.  He is the co-founder and host of the monthly Reston Readings series and he teaches at NVCC in Northern Virginia.

Jen Grow: Congratulations on your latest release, Three Men. It’s a very introspective, powerful collection. What sparked you to write novellas? Did you deliberately write them in relation to each other, or did a theme arise organically? How did they inform each other in the writing process?

Nathan Leslie:  Thank you so much, Jen.  And thank you for taking the time to chat with me.  The theme, if there is one, arose organically—so no, I did not set out to write a collection of novellas, but over the years I wrote these three longer stories and they did seem to hang together rather well in some ways.  “Introspective” is a terrific word to use regarding these novellas.  All three characters, are to some degree inward-looking, or at least they are during this wedge of their respective lives.  Characters always come first for me.  If we think of short stories, novellas and novels, novellas are the forgotten middle child—often ignored and usually considered to be a “poor man’s novel,” so to speak.  However, this form is quite useful dramatically and I find it comforting to have a bit more time and space for my characters and stories.  And yet the readerly expectation is not so grand, as it sometimes is for novels.

JG: I am struck by the unspoken quality of the your storytelling, or what I refer to as ‘negative space’—a visual art term that refers to the space around an object that’s as important to the composition as the object, itself.  You are very good at allowing small gestures and silences to surround your characters and reflect a certain tension or mood. Would you talk more about this aspect of your writing?

NL:  This is a wonderful thing to say and thank you for the astute observation.  I am usually less interested in dramatizing “big events,” since that is really cinematic territory.  For me, I am mostly concerned with uncovering some kind of psychological truth in each novella in this collection and to do this I must often look at some of the quieter moments.  This is what makes prose so powerful—it allows the reader entry into the mind.  No other medium does this as prose.  Prose allows the reader to eavesdrop a bit, to enter into another’s mind.  This is a sacred power and one which is often ignored or dismissed.  We live in a world which is dominated by news stories about celebrities and millionaires and political drama but the stories of ordinary people are much more interesting to me, and far more difficult to unearth.

JG: The main characters in all three novellas are adrift, searching for meaning. In Arrows East, Sean has some dicey encounters as he tries to hitchhike his way back home. In A Beach Tale, Donnie is coming of age, trying to navigate his way into his own life. You describe it this way: “Donnie sits up in bed and wonders what he will do with his time. This is what prisoners must contend with all the time.” And The Janitor finds August trying to clean up the pieces of his life after a terrible accident. “The idea, August says, is to be in and out as quickly and invisibly as possible. You want to disappear. You want your lack of presence to be felt. If anyone thinks you were there, it’s usually because something is not right: bits of shredded paper still on the carpet, dust on the windowsill. A good janitor is in the background, the best place to be. You disappear.” What draws you to characters that are nearly invisible, mostly unseen to the larger world?

NL:  I’m not sure.  I suppose I find characters such as these inherently more intriguing on some level.  Perhaps the reason has something to do with the fact that we are all unnoticed and unremarked upon 99% of the time.  We can Tweet and Facebook as much as we like, but this does not ignore the fact that underneath the surface we all have buried expectations and aspirations and resentments and memories of which we may not even be aware ourselves.  Perhaps it is just the perfectionist in me who believes that we are all inherently discouraged, at least on some level.  Most things do not truly turn out the way we believe they should.  So, yes, Donnie, Sean, and August are wayward or woebegone, but then again to some degree who isn’t?

JG: There is a current of quiet, tentative faith throughout these pieces. In the opening novella, your character Sean “…does not believe. But he kneels on the floor of the car. He closes his eyes, presses his hands together.” In A Beach Tale, a character tells Donnie, “There is something beyond us that we have to heed or we’d be guilty of kicking sand in His face.” And August is told that, as a janitor, he is “part of the ecclesiastical staff… He’s a kind of missionary too.” Can you elaborate on this? How does faith or spirituality inform your writing?

NL:  Great observation.  I wrote a collection entitled Believers, so this is a theme that I keep returning to consciously or unconsciously.  I am not religious personally but I believe that most of us have a level of spirituality that is often unexpressed or uncommunicated—this is certainly the case with the characters in these novellas.  We may not even know how to verbalize what we believe or give voice to the underlying connections that move us.  It is quite abstract.  However, in the case of August, yes, I am striving to represent a kind of residual spirituality, absolutely.  With Sean and Donnie they are young men trying to get by in their own way and they are in very difficult situations, both of them.  It is during these times that we often lean towards what we might think of as a higher power.

JG: How has your work has evolved between the writing your novel, The Tall Tale of Tommy Twice and Three Men? Obviously, you were in different places in your life – physically and emotionally – when each was written, but what else has changed in your process and perspective?

NL:  Well, I composed drafts of two thirds of Three Men actually before Tommy Twice.  However, the finished product obviously took a bit longer for me to complete.  These novellas were a bit slow to evolve and it is difficult for me to say what my state was overall in writing these novellas.  However, my intent is clearly different here than it was with Tommy, and these novellas are much closer to the gritty realism that I initially embraced early on in my writing career (and to which I still often adhere), whereas Tommy Twice was something different altogether—much more of a yarn.  That said, in both works I am writing about isolated individuals, to some extent.  They make connections but they are often islands.  Perhaps this is just something that is unavoidable for me to represent.  Sibs and Root and Shoot were also quite different than either Tommy Twice or Three Men and I’d like to think I’m able to vary my prose somewhat to fit the narrative situation.  With Root and Shoot I was focused on flash fiction pieces, often with a different aesthetic eye than I used in either Tommy Twice or Three Men and since Sibs is a thematically-oriented collection, everything returned to this concern when I was in the process of writing that particular book.  Ultimately my readers can make the connections probably better than I can.

JG: I’m really curious to find out about your writing process. Do you have rituals? Are you a daily writer? Do you outline and plan your pieces out or do you write from a more intuitive place?

NL:  I love this question because each and every writer is so different.  Right now I am a seasonal writer, in terms of crafting new work.  I do most of my writing in the summer when I am not teaching and I tinker during the school year.  That said, I do write some nonfiction during the school year—that seems to be something I am able to do without a lot of time and space.  Writing fiction necessitates more air—I need a good amount of time to breathe and focus and think deeply.  It has to do with the Imagination.  I usually need a block of uninterrupted time to write a story or a novel.  Often I do some sketching and sometimes I do plan the arc of my stories and I usually do some preparatory work in terms of characterization and research, however, at other times I am more intuitive.  Novels usually take a bit more outlining for me, stories a bit less so—but not always.  Every story and novel is different.

JG: I know many writers have other creative outlets that feed their writing in some way. Do you have creative pursuits that compliment your writing, or has your journey always been about writing?

NL: For me it has always been writing.  I mean, I am certainly inspired from time to time by plays, film and music, but I am not an actor, musician or film director.  I don’t really have any artistic ability and I can barely clap on beat, so I’ll stick to writing.  I do a lot of cooking, however, and I do see some similarities between cooking a great meal and writing a story.  For me, it has a lot to do with the preparation and imagination, in both cases.

NL:  As you mentioned, this is my first book of novellas—and who knows, perhaps my last.  I have two collections of short stories I am in the midst of shopping around and I have a short novel just finished last summer.  So it has been quite a busy time for my writing over the past few years.  One of my short story collections is quite a bit more comedic, ironic/satirical in nature.  My novel is different structurally (it is told in reverse time) but is more in the vein of Three Men in terms of characterization and mood.  So I’m still investigating various approaches to fiction all the time.  I have also been working on some longer nonfiction and the occasional poem, also.  Writing various genres and utilizing diverse styles is a way to attempt to find newness all the time.

2 responses to “An Interview with Nathan Leslie (by Jen Grow)”