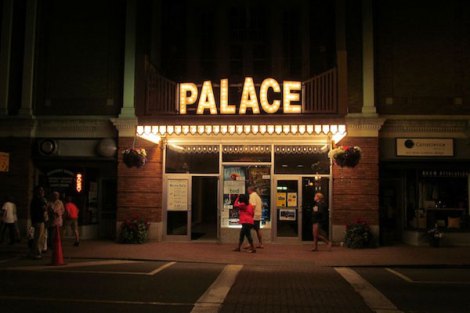 You sit there in the passenger’s seat, a leftover bag of popcorn on your lap, and listen to me gripe. What a bad movie. Cyborg nonsense. With my hands at five and seven, I say if time travel ever exists in the future, why haven’t they fixed today?

Popcorn crunches in your mouth. You say, “Maybe this is the best version of the world we can ever experience?”

Buildings with dirty lots blur behind the fogged glass.

“I bet time travelers have tried it all,” you say, “and this right now is the best version of the world and history they can come up with.”

We aren’t even high.

You explain your theory: that we’ve probably lived a million variations we don’t know about. At one point, say, we had a child, but that child turned out horrible, so someone went back and made sure we kept off that track. There’s a different me out there who never met you. There’s a different you who left me at the altar and joined a cult.

“We exist now because someone keeps fine-tuning our paths so that we exist now,” you say. “We are living the best lives we’ll ever live. This is the best Earth we can have.” A trailer truck passes in the other direction. You twist to follow it out the back window, and the coal black east fades like a memory in the rig’s taillights.

“Some homeless guy is the greatest version of himself?” I ask.

“I don’t make the rules,” you answer, turning back. “We’re in the optimal equation.”

I reach in the dark and find your denim thigh.

We drive on a bit, quiet. You say we need to stop at the supermarket, so I pull off three miles before home and park at the grocer’s. I push a cart inside while you run through a mental list under the buzzing lights. We need staples: milk, bread, cheese. I think I see the handsome local weatherman buying cat food, but you tell me he’s too short.

At the register, the purple-haired cashier says, “Realized you forgot something?” We try to smile like we know what he’s saying, but our faces betray us and he holds up the jug of milk.

“Weren’t you just in here?” He tells us we had bought two pints of ice cream and dryer sheets.

“You sure?” the cashier asks.

People are nuts. We pay in cash and hustle back to the car. Ditch the cart in the corral. The air hurts it’s so cold. It’s so cold our jeans are stiff. Our lungs burn. The world can be cruel.

“Can we eat popcorn for dinner?” I ask once I’m safely behind the wheel.

“We’re thirty-four,” you say, your fingers quivering on the radio dial. The seats start to feel like hands once the crappy heat kicks on. Lyrics twist into hot bubbles over the dashboard, and up on the hill in the distance, we can see the tip of the glowing cross from the church. The thing is brighter than the moon.

“We’ll have grilled cheese when we get home,” you say.

The perfect meal for a cold winter night, for an optimal life. I pull onto the road, you hum to the music, and I consider the different versions of me out in the different versions of the universe. All the possibilities. The good and bad. Rich and poor. Married and single. I hope they’re going to eat grilled cheese sandwiches tonight for dinner, too. I hope we have that much in common with each other.

“If we have cans in the basement.”

Nothing sounds better, I think. You wipe the fog from your window, and instead of turning left at the light, I turn right to be spontaneous, or not. We’ll take the long way home.

Benjamin Woodard is editor in chief at Atlas and Alice. He lives in Connecticut with his wife and teaches English. His recent stories have appeared in, or are forthcoming from, Atticus Review, WhiskeyPaper, Hypertrophic Literary, and others. Find him at benjaminjwoodard.com or on Twitter at @woodardwriter.

4 responses to “Fiction: Living Our Best Lives by Benjamin Woodard”