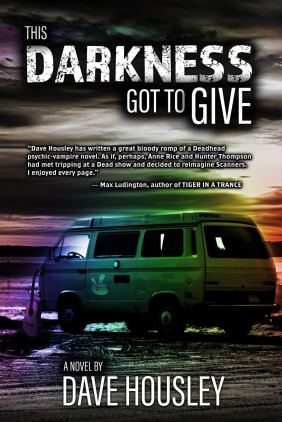 This Darkness Got to Give

Amazingly, Dave Housley informs us in his bio that he had read only one vampire novel before writing This Darkness Got To Give.  It would appear that he is steeped in the genre. This Darkness Got To Give is an offering that fits precisely into place in what has become a vast matrix of vampire fiction.  The rules about vampires throughout the genre vary only so much, and the cursed condition is clearly understandable in this narrative, so as not to detract from the slightly different tale that seems to be the author’s true aim.

The vampire is called Cain.  He is introduced in the throes of his characteristic hunger, but he is not obsessing over his potential victims, nor his vampire origins.  His feverish ruminations concern only a mysterious Dealer and a fateful dose he once consumed.  The blackout windows of Cain’s van allow him avoid sunlight while traveling, so that he can follow the Grateful Dead.  He leads his unlife on tour.  As the hunger overtakes Cain, the descriptive sounds of the tour sink perniciously into the reader’s senses.  “Somebody playing a bootleg that he identified as the Europe ’74 tour off to his left; behind him, the terrible parking lot band that had been playing off and on ever since they’d arrived in D.C. two days ago… They shouted, sang, danced, fought, laughed, wept, chanted, chattered crazy, all of it a mere ten feet away from where Cain lay right now.”  The setting of the tour encompasses the entire novel.  The reviewer found himself wondering if the author wasn’t drawn to the vampire because only an undying being could ride with the Merry Pranksters, see multiple generations follow the Dead on tour, and still mourn the death of Jerry Garcia in 1995.

Housley is the author of two anthologies of short fiction, and his experience as a writer of short pieces is evident in the unfolding of this story.  We meet the essential characters early. Peter, the young agency recruit, proves to be a vulnerable and likable personality. His story is impacted by his decisions, but it is ultimately an emotional progression, and one that is lived quickly. The writer keeps up a steady and deliberate pace. There is no superfluous chapter, and there are no superfluous characters. A sense of inevitability establishes itself early enough to result in a great tension being maintained in anticipation of the climax.  The reviewer cannot help but appreciate the discipline required to maintain such focus.

While the lack of nonessential prose is impressive, the novel does appear to be a little short.  Every character is dutifully presented as a thinking and feeling person with some kind of spark, but few of them are given much room in which to develop.  In a tale with very brief chronology, we do not necessarily require growth across time, but we do need growth of characters in our perception.  This novel only has time for us to see a couple of characters laid bare.

The character of Peter possesses the brightest spark.  There is a clearly present mystery about him from the beginning, but Peter is not so much intriguing as he is endearing.  His warmth and innocence become more apparent as we spend more time with him.  Still, it does not seem to be enough time to also intrigue us very much about his origins.  Were Peter’s character developed further, we might be more convinced by the oddness of his personal mystery, but then again, it serves his tale for events to pass by too quickly.  It is easy to empathize with him that way.

The vampire, Cain, cuts a poetic figure, but in the way that he is diminished.  One memorable moment occurs after we’ve gone a number of pages without seeing much of him, and then we see Cain again, but through the eyes of another character.  Looking at Cain, she sees a broken down and defeated old biker.  It is a moment of departure from the glorification of the vampire that one might be used to.

The novel does finds itself bound to conventions.  Disciplined as this plot’s execution ultimately is, some of its necessities come to dominate the setting.  Peter’s and Cain’s journeys are not enough to keep the story moving by themselves, and the powers that ultimately clash are driven by personalities apart from these main characters.  Some of those are police and government agents.  Their presence should provide a sense of drama, but these roles are awfully familiar for that, and these characters, especially Detective Jenkins, have to be appreciated as individuals first and professionals later, because nothing feels new about a cop tracking down a vampire.  The Dealer represents a real threat, but his intentions and his origins may not seem greatly compelling to the aficionado of vampire fiction.  In Cain’s mind, he is no less intriguing than Lucifer himself, but when the reader meets him in person, he is a sketch of a persona, made substantial only by his status as a fulcrum of the story’s events.

In a way that may be reminiscent of the loving spirit one would bring to a Dead show, the author treats every character as an emotional being.  The ensemble is like a crowd of people, each of whom has an aura of a different color. And in the end, it’s what matters to us most, rather than what a long trip it’s been. – Joseph Crespo

One response to “Review: This Darkness Got to Give by Dave Housley (reviewed by Joseph Crespo)”