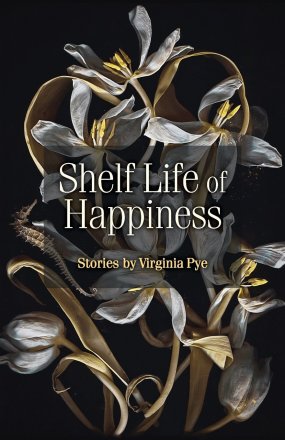 If you’re looking for something to read to give your brain a little break from the daily onslaught of social media posts and political gunk, Virgina Pye’s Shelf Life of Happiness will help you out.

Her collection of short stories feature a delightful variety of characters including but not limited to: a miserable wife on a family vacation to passion-filled Italy; a Korean War veteran struggling at the end of his artist career; a pre-teen skater foiled against his poser dad; an artist drowning in his bad decisions; the best friend of a dying but also newly-wed AIDS patient; and the unique perspective of “we” from a parent at an Easter party complete with a decaying sparrow in a drawer.

Pye’s characters are unique and complex, and readers will think about them long after they finish the book. This is an obvious nod to Pye’s skill as a writer: Her prose is dependable and delivered with confidence. And I don’t mean that in a she’s a show-off way. I mean that in a she-can-really-write-a-story way. You, too, will be impressed.

Read Pye’s “An Awesome Gap” and then state how accurately and confidently you can discuss the vocabulary and technical skills involved in skater culture. Also, for a visceral (but I won’t specify per spoilers whether it’s metaphorical or not) drowning experience, see: “Redbone.” To root for an almost-spinster, visit: “Her Mother’s Garden.”

At times, Pye lingers a little too long in the interior thoughts of her characters, which creates more of a telling than showing feel (subsequently making some sections feel longer than they should be); however, these moments are full of the tender, conflicted nuances of humanity, and one cannot fault Pye for exploring them.

As a result, we receive full psychological portraits of these people, which is often where each story hosts its main resolution—the character realizes something, feels something, experiences something that changes their mind. In the case of “Crying in Italian,” the main character’s realization causes her to finally confront her husband about her feelings; however, the story is cut there. Sarah’s choice to act and the consequences of that choice exist in an unwritten future. Again, it makes the reader ponder this long after the story is finished, but also hope there was a little more overall to the dramatic action in the collection—the culmination of which seems to feature (more often than not) characters reacting to situations that carry more drama than what their individual lives contain. In “White Dog,” when the artist shoots the dog and simultaneously his career’s future, the stakes weren’t ever high enough for his crazy decision to bear the full weight of its insanity. The majority of the multiple-perspective story consists of the characters sizing one another up—the conflict between them is entirely internal which is why the shooting doesn’t kick up the action. The scene is left as an image the artist wants to paint, yet another unwritten picture the reader is left to piece together on their own.

While a short story is often defined as something you can read in one sitting (and Shelf Life of Happiness does have a couple pieces you can breeze through), these stories are long enough for you to feel like you’ve enjoyed some solid story-telling and escaped for a little while. All in all, reading Pye is time well spent.-Shelley Harp