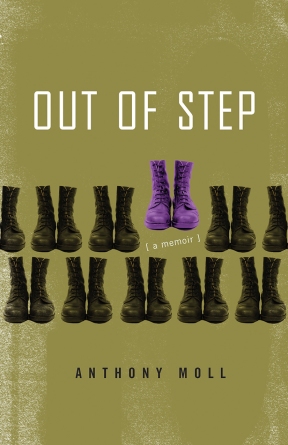 The U.S. Defense Department’s “Don’t Ask, Don’t Tell” policy may have been repealed in 2011, but as evidenced by the recent court ruling in favor of the Trump administration barring some transgender individuals from serving in the military, the issues impacting LGBTQ service members and veterans are far from resolved. It’s refreshing, then, to get a perspective on military life that transcends sweeping policies and a culture of toxic masculinity to thoughtfully examine the complications of coming of age in this climate. This is the kind of story Anthony Moll offers in Out of Step, a memoir about life as a queer Army soldier during the “Don’t Ask, Don’t Tell” era.

I’ll say this first: Moll’s description of 9/11 is one of the best I’ve read, a significant achievement for any book about the United States military in the past quarter century. “On a boring September morning, a few hours before my boring shift at a boring job, I found myself half-dressed and staring at my television, slack-jawed with awe, floating in helplessness.” Clear. Concise. True. No matter where we were on that day, this is how we felt. In one sentence, he lays the foundation for a common ground of understanding that carries through the recounting of his individual experience.

I’m a sucker for vivid description, and Moll’s use of photos to illustrate a particular moment in time, whether a snapshot of his comrades in uniform; the last photo taken of a friend, dressed in a toga made of Transformers sheets; or himself, online, in heels and makeup, are effective tools to transport the reader into his world.

In one chapter, Moll asks his reader to “imagine a soldier” and juxtaposes that image with a description of himself as a queer, never-deployed, winner of 2008’s “Soldier of the Year.” Moll takes preconceived notions and rotates them, then goes a step further when he compares those images to the names of 30 service members killed in just one month of the same year.

From short-lived secret hook-ups to endured slurs from commanding officers, Moll details the challenges faced by those who don’t fit the mold of a “typical” army recruit. He deftly underscores his position as a stranger in a strange land through recollections of visits to bars while stationed overseas in cities like Seoul. Working abroad with fellow soldiers he may or may not identify with, each moment underscores his feeling of otherness even among a group that was, in its own way, isolated as foreigners.

If I have one criticism of this book, at times it reads like a collection of separate essays rather than one cohesive narrative. While memory is fragmented—and perhaps that’s the point—some of the sections, such as a chapter consisting merely of headlines from the Reno Gazette-Journal, seem to be more an experiment in style rather than a plot point to move the story forward. These fragments create a somewhat disjointed experience instead of keeping the reader immersed in Moll’s story.

Although Out of Step focuses on his time in the military, Moll’s writing shines through descriptions of the life he left behind in Reno. His home, family, and friends are specific to his story, yet he manages to convey the universal struggle of teenagers from Anytown, USA. My midwestern high school experience was distinctly different from Moll’s, yet I found myself transported back to late-night conversations with long-ago friends, and more recent reflections (spurred by the rear-window view of social media) on the divergent paths our lives have taken.

Moll provides a vivid picture of his life in the military and how it helped shape him into the person he is today. While his overall premise hinges on the difficulties he faced, the story is sustained by an undercurrent of optimism. With a sort of island-of-misfit-toys aesthetic, it’s clear that while he navigated the rigid framework of military life, he thrived in a personal journey of self-discovery and managed to find his tribe, and himself, along the way.