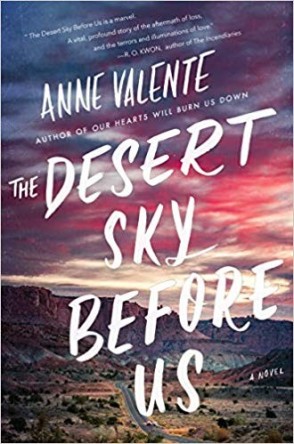 The Desert Sky Before Us

What does a person do with “the heavy weight of expectation, of being a girl who does?”

Beyond the lamentations of bereaved adult children, the scenic travel log, the Jurassic-era jigsaw puzzle and the pre-apocalyptic warnings of climate change, this is the central inquiry in Ann Valente’s The Desert Sky Before Us. How does a daughter navigate her feelings of inadequacy, of failing to live up to the promise of her abilities? How does she reboot, begin again once she has lost her way?

How does she navigate this personal terrain in a world where planes are falling from the sky, in an alarming rate, from a phenomenon called clear air turbulence, a turbulence that is sudden and violent, unpredictable, but more frequent because of global warming?

Two sisters, Rhiannon, a former race car driver and Billie, an ex-convict, grapple with these questions as they road-trip west from the water-logged plains of Illinois to the parched salt flats of Utah. They follow a zig-zag path, guided by a mysterious notebook of coordinates and drawings pressed into Billie’s hands four months before their mother’s death. Their ultimate destination is their mother’s memorial service–to spread her metaphorical ashes of silt and clay representing her life’s work as a noted paleontologist. Beyond that, they don’t know where the notebook will take them because Billie promised that they would follow the path, one page at a time, to not look ahead.

Their mother’s guiding presence is palpable as they travel through Missouri, Kansas, Colorado, New Mexico, and Utah, to a dinosaur science center, fossil rich hiking trails, canyons, a bat filled amphitheater, star-filled campsites, a dinosaur bone quarry, and an aviary. At the prescribed coordinates, they discover geocache boxes each containing a solitary trinket or memento or talisman. Each a message, a postmortem directive from Mom. The sisters must glean meaning from the items. Along with the stops along the way, what message is their mother trying to convey?

The long tedious hours of the road, the boredom, the cramped confines of a vehicle serve as a pressure cooker where secrets, turbulent emotions and insecurities, hidden during Billie’s six years of incarceration, bubble to the surface and ultimately exhale in an emotional scream.

Billie’s long-term abusive relationship with a man named Tim culminating in a final beating so brutal that Billie attempts to end her life with a match and a can of gasoline rather than continue on with her listless life. The burns and the skin graft scars offer tangible evidence of Billie’s interior ache, her lack of ambition beyond following Tim and a passion for falconry.

Rhiannon, a stock car, groomed by dad since she was a teenager, winning on the circuit, the rare female driver, suddenly loses her nerve, hangs up her helmet and becomes a textbook rep. Initially she blames her change of circumstances on Billie and her arson conviction.

Meanwhile, the sisters learn more about their mother’s work, that she, Margaret Hurst, is a “household name” given her discovery of an intact stegosaurus skeleton and her study of its armored plates, hypothesizing their orientation and purpose: as a kick stand, camouflage, a display to attract a mate, or temperature regulator.

The road trip operates as a living memoir and imperative written expressly by a mother for her daughters: this is who I was, this is what I did, this is a road map for who you can and should become.

The Desert Sky Before Us is an ambitious novel. It tackles wide-ranging subjects: climate change, domestic violence, Jurassic era dinosaurs and the cause of their extinction, NASCAR, falconry, sibling rivalry, ambition, corporate greed vs safety, discrimination, art. The complexity of its material, the author’s deep research, as well as, her philosophical and moral explorations serve both as a strength and the source of the novel’s weakness. With so many topics to cover, even at 448 pages, the reader is held at arm’s length. Despite the gravity of many of these subjects, there is little emotional pull. The seven and ultimately eight plane crashes drive the dramatic tension but they are presented as disembodied ribbons of radio reports and barroom TV news spots. The horrific statistics of fatalities and corporate greed that reopens the airports to air traffic are presented like a footnote, the reason why their mother arranged the road trip, a ploy to keep them from flying. The sisters reason that their mother, having studied prehistoric climate change, must have known or could foresee the plane crashes.

I kept waiting, hoping that Margaret Hurst, the paleontologist, had some scientific breakthrough–she had learned about the stegosaurus plates, the thermal regulating features that detected temperature shifts could be applied to the impending doom caused by current global climate change but none was forthcoming. Nor was there a plea for Billie and Rhiannon to make such a discovery. Instead, Margaret Hurst the mother offered this missive from the grave: seek your passion, do what your love.-Lisa Slage Robinson

One response to “Review: The Desert Sky Before Us by Anne Valente (reviewed by Lisa Slage Robinson)”