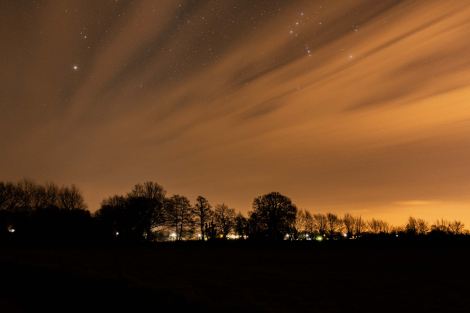 One long night in December, Orion—yes that Orion—was my lover.

We met at a diner. Orion waved away the cream that came with his coffee carafe. He took his coffee black, and said that milk was like a crude street lamp leaking artificial light into something pristine.

He was a bit mean, but I was drawn to him anyway. Like I was lost at sea and he was there, taking up the whole sky to help me navigate safely.

When we got back to my place, I tried to stay up all night. I ate caffeine pills when I ran out of coffee grounds, black tea, and chocolate-covered espresso beans. But on my last cup of budget-brand dark roast, he shook his head and laughed when I added in a few drops of half-and-half.

I didn’t have a plan of seduction. In general, I am drawn to liquids and warmth, and so I thought he might be the same. Of the soups I could make on my single burner—condensed cream of mushroom, condensed chicken noodle, condensed beef stew—he didn’t have a preference.

But we took our bowls out onto the balcony in the below-zero weather. Polar night of an Arctic winter. I could only handle about five minutes of the cold, even with my many layers and the hot soup burning its way down my throat. Orion stood out there for hours, looking for his place in the sky. The soup froze.

We had the rest of the night, and we took it. He told me to turn off the lights, close the blinds and the curtains. I found another blanket to cover the window. In the blackout, he was bright like alarm clock numbers at three in the morning.

Only he was bright that way everywhere. At the tips of his elbows. All across his freckled nose. Luminescent eyelashes. Fingernails. Happy trail. He tasted like good espresso and felt like a first wish—sincere and deep.

He told me, in our afterglow, that he was wandering because he was fading. There was too much light in and out of the city. When I woke up at polar twilight, pink horizon at the edge of a navy blue sky, he was gone. And he didn’t return when true dark fell again.

Now I drive incessantly. City to prairie to mountain. Arctic to Antarctic. I avoid the midnight sun. Every time I stop, I look up and count the stars inside the four corners of that body; less than ten and he’s not really there. I burn fuel to move and linger on the three pins of his belt.