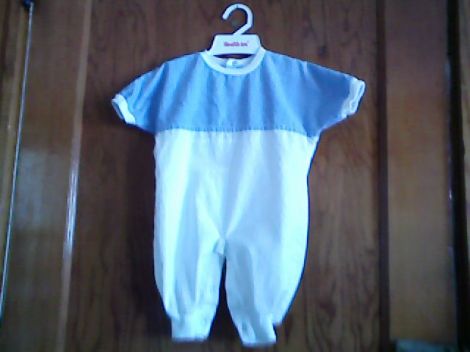 I bought the blue-and-white onesie just before my friend Roxanne gave birth. She ended up having a girl. In those days it was unthinkable to give blue clothes to a baby girl. I waited a year or so for someone in my circle of friends to have a boy, but no one did.

By then I’d fallen in love with the onesie. A soft, brushed-cotton, short-sleeved outfit with a robin’s-egg blue top, it had a white rounded collar and stretchy white cuffs, and white calf-length bottoms, with tiny metal snaps dotted along the inseams and down the back.

So I kept it for myself. For my future baby. I was thirty-eight, single, still hopeful.

Dreams of motherhood rippled throughout my childhood. Brad Hart and I were engaged in first grade. All the girls chanted, “Debbie and Brad sitting in a tree, k-i-s-s-i-n-g. First comes love, then comes marriage, then comes baby in the baby carriage.” I never doubted my destiny.

By sixth grade, my best friend and I shoved pillows under our shirts and waddled around, rubbing our protruding bellies, imagining what a kick from the inside would feel like. Then, as a teenager, I suffered from bedpost-clinging monthly cramps, but I figured it was all for a good cause because I’d have children someday. Three, in fact.

At the University of Michigan during the1970s, my course load primarily included artsy-type classes with little structure. Casual sex without condoms was the norm, and everyone understood that the woman supplied the birth control. In my case, a diaphragm.

A couple of weeks before my twenty-first birthday, my period was late. I didn’t think much of it until the swollen, tender breasts and morning nausea. Wyatt, I thought. That hot one-night stand a month earlier.

Wyatt was a fellow waiter at Bicycle Jim’s, where I waitressed part-time. We often flirted while filling ketchup bottles after hours. Bearded, with shoulder-length auburn hair and a Mark Spitz–like swimmer’s body, Wyatt came home with me one January night. At the crucial moment, I realized my diaphragm was in the bathroom. Damn, I thought. I hate to break the mood. And . . . well, what are the chances, really?

Home pregnancy kits didn’t exist then. I went to Health Services to confirm what I already knew.

I called Wyatt with the news. I told him I was going to have an abortion. He offered to pay for half, the customary arrangement then.

The Planned Parenthood counselor, a slender woman with a thick braid slung over one shoulder, explained my options. “I want you to be sure this is the right decision,” she said kindly. “If you need more time, you can go home and think it over.”

I haven’t even declared a major, I thought. There’s plenty of time to have a baby. Or three. But not now.

I told her I was sure. We scheduled the appointment for the next day.

The procedure was quick. Over the whirring of the vacuum’s suction, the doctor asked how I was doing. The nurse squeezed my hand. I threw up from the Demerol.

Afterwards, a group of women around my age relaxed in orange vinyl recliners, nibbling Ritz crackers and sipping apple juice. And that was that.

I never forgot the abortion entirely, but it receded into the shadows of my life, leaving just a faint imprint of what might have been.

After college, I moved to Boston. Depressed and aimless, I soothed myself with food. I often wore a billowy denim jumper to hide my body. More than one stranger approached me saying, “Congratulations! When are you due?” Part of me wanted to disappear; another part wanted to embarrass them by saying, “Guess what? I’m not pregnant, I’m fat.” Sometimes I’d just pat my stomach and smile.

Over the next decade, thanks to therapy, I wriggled slowly out of my depression, jettisoned the weight, and, along the way, became a therapist myself. I celebrated friends’ weddings, attended their baby showers, greeted their children. When would it be my turn?

Not long after I bought the onesie, in my late thirties, I met Daniel. That he was a former “Jeopardy!” champion seriously boosted his appeal, but it was his status as a brass player that won me over. Trumpet, tuba, trombone. Just the word “embouchure” made me tingle. For six steamy months, I could say “my boyfriend,” finally—a claim I’d not enjoyed since college. But, despite being my best kisser ever, Daniel was not my Mr. Right.

Much as I wanted kids, I never really considered artificial insemination or adoption, mostly for financial reasons. As the window for getting pregnant naturally closed, I dabbled in the brand-new cosmos of online dating. Dozens of miserable encounters later, nothing.

Over time, my maternal urges waned as I focused on building my career. But every spring, I purged my closets and came across my blue-and-white onesie on its miniature hanger, covered by its original OshKosh B’gosh bag, and I was reminded. It had acquired almost beatific status—the symbol of my dream of motherhood. Sometimes I’d peek under the bag, touch the soft brushed cotton, and put it back. Sometimes I’d slide it down the wooden rod quickly, out of sight.

I was a spinster. Not as bad as it sounds, really. In my fifties, I had freedom, solitude, flexibility. Menopause punctuated the end of my fertility with a whimper, not the dramatic bang I’d expected after forty years of PMS and cramps. No hot flashes or night sweats. No massive mood swings. My periods simply stopped.

Birthdays beg for reflection, decade changes especially so. When I turned sixty a few years back, I wondered, What have I accomplished? What’s left? What will my legacy be? I felt an urgency to create, to contribute. So, along with juggling three jobs, I returned to grad school for creative writing. Since then, I’ve been mostly content, sometimes lonely, never bored. I’ve eased into a kind of acceptance. No more frantic search for a soulmate. Not that I’d forgo the opportunity, but it’s no longer at the top of my to-do list. And no more dreams of motherhood.

That year, a scene entered my mind, surprising and unbidden. I envisioned my twenty-one-year-old self, the one with no major and a frizzy perm, the one at Planned Parenthood. My older self leaned over and whispered to her, “So, Deb, guess what? This is it. This will be your one and only pregnancy. It’s not going to happen—the engagement, the marriage, the three kids, the script. What do you want to do?”

I’ll never know how that young woman would’ve answered. If we could twist time, would I rewrite my story? The one I began crafting with Brad Hart way back in first grade? If I had gone through with the pregnancy, my child would be almost forty-five today. And during that birthday vision, for the first time ever, I thought, Was it a boy or a girl? What would my child have been like? Would I have been a good mother? Would I be a grandmother now?

These questions are unanswerable, of course, and pressing for closure yields suffering. I recently heard a quote from a Zen master, who, when asked to name the secret to happiness and equanimity, said, “Complete, unrestricted cooperation with the unavoidable.” The unavoidable, perhaps, being what actually is—the truth of our lives.

Some weeks after that reverie, Maura and Rob, my thirty-something downstairs neighbors, had a baby boy, Jackson. In the five years that we’d shared a two-family house, they’d marched steadily down the traditional path. When they vacationed in Jamaica, I fed Mack, their oversized tabby cat. They returned tanned and engaged. When they honeymooned in Hawaii the following year, I kept Mack company again, the two of us surrounded by stacks of gifts and other wedding detritus, including Maura’s full-length tulle veil, which dangled from the French door, protected by plastic.

I had little in common with Maura and Rob besides the driveway and a passion for the Red Sox. They voted Republican. I voted Democrat. They drove a new Lexus. I drove a Honda Civic. They celebrated Christmas. I didn’t. My solo life was probably as foreign to them as their coupling was to me. I wasn’t envious, exactly. More curious, in an anthropological way—what is it like to follow the script, build a history together? Anticipate the milestones as they approach and unfold in perfect order? They would be buying a house and leaving soon, like the three couples before them.

Right after their son was born, during my spring closet purge, I spotted my blue-and-white onesie, stuffed between the puffy down coat and the lavender rain slicker. I pulled it out to say hello and, this time, rather than replacing it, I hesitated.

What if—? No. How can I? I thought. I’d met Jackson only once, but I’d fallen in love with his eye-popping grin and big, goofy ears.

A deep wave of sadness rolled slowly from my belly into my chest.

At the Dollar Store, I bought a yellow gift bag decorated with giraffes, some crisp white tissue paper, and a card. My pink-blue stereotype long since released, even if Jackson had been Jacqueline, I was ready. At home, I laid out the onesie on my bed, carefully snipped off the store labels, took a photo, and washed it along with my other delicates. After twenty-three years in the closet, it deserved to be washed.

On the card, I wrote, “This onesie comes with a story.” I shared my tale with Maura and Rob. I said I hoped they liked it. I said I hoped Jackson would fit into it by summertime. I said I hoped that, when he outgrew it, they’d pass it on to another couple. Maybe that’s my legacy. My onesie, a gift for the child I always wanted, the one I never knew.

Some names have been changed in this work for privacy.

Deborah Sosin is a writer, clinical social worker, and GrubStreet instructor. She holds an MFA from Lesley University and an MSW from Smith College School for Social Work. Her essays have appeared in Salon, Boston Globe Magazine, Cognoscenti, The Writer’s Chronicle, The Manifest-Station, and elsewhere. Her picture book, Charlotte and the Quiet Place, won the Gold INDIEFAB Award, among several honors. She is currently seeking representation for her memoir-in-essays, Heartbeats and Other Seismic Matters, from which this piece is drawn. www.deborahsosin.com; Twitter: @deborahsosin

6 responses to “Creative Nonfiction: The Onesie in the Closet by Deborah Sosin”