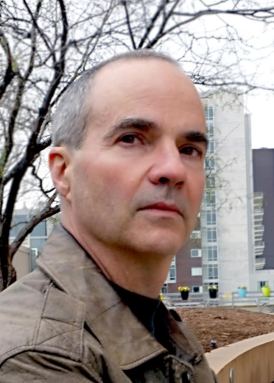 I’m Steve Adams, a writer, writing coach, and a freelance editor who’s studied a wide range of artistic forms before landing, quite late, on prose. As I’ve always been fascinated by the artistic process, I decided to start working my ideas out on the page, using a quote from a writer or other kind of artist as a prompt. I hope my column, “About Your Writing,” is useful to you.

One thing I see over and over when I edit writers’ prose, especially newer writers, is a gap between what the writer believes exists on the page as far as the perceived physical content of a scene (visual details, physical actions, etc.), and what the reader is able to create in their minds from the actual words on the page. Because of this, frequently I leave irritating notes in the margins highlighting a line or two and saying things such as: “What does this mean?” “How did they get here?” “I’m lost.” And for the most part, it’s not like I couldn’t piece the scene together by assuming what the writer meant. But that doesn’t serve the writer, because you can be damn sure that a reader, whether in the general public, or a gatekeeper who may be an intern at a journal or a publishing house or an agency, most definitely will not. Because they know it’s not their job. The general reader puts down the book and checks their phone, and the intern passes on the manuscript and turns to the next submission in their pile. (It’s always a huge pile. You should keep in mind they’re looking for a reason to say, “No.”)

I don’t have any fast and easy answers here (actually I tend to be suspicious of fast and easy answers), but I think it is of value when writing to be conscious of the different ways that film, and stage plays, and prose work when they are processed by their particular audiences. Never forget: All audience members co-create. They co-create differently with different forms, but something is always going on inside them, however the material is presented. They’re working with us. They’re playing with us. This is why they pay their money and their time to engage us and our creations. And the more we understand the limitations and opportunities each form offers, and manage each accordingly, the more successfully we will reach our audience.

So let’s define that gap, that bridge, between the work of art and the audience as “the interface.”

With film, the visuals are fully completed for its audience, most often in a world that looks representational as far as their own world. The viewer, if the film is working, undergoes an internal emotional experience from following the story, from seeing it put together in front of them, and then putting it together inside themselves. That is how they co-create, by responding emotionally and intellectually (and it’s always both) to what they’re seeing in full technicolor.

With theater, the audience is given live characters (actors and bodies in a three-dimensional space), but the set, at least for the last 100+ years of theater, does not attempt to create a representational illusion of the world as we know it, as film does. In fact, film freed theater from pure representation (as photographs freed painting from the same). In modern theater, sets (visuals) are usually abstracted, a kind of dreamscape. The audience, used to this convention, begins co-creating the world of the play as soon as they see the stage, but especially once actors step upon it. The abstracted set asks the audience to complete it, or fill it, while live actors who, by their very bodies and timbre of their voices—whether it’s John Gielgud as Lear, or Theresa Merritt as Ma Rainey—anchor the imagination and the intellectual part of each audience member. The audience never has to ask themselves where Willy Loman is on the stage, or what he’s doing, or where he’s sitting, or how he got there. Because Willy Loman is simply there in front of them, and when he pours himself a glass of milk in the kitchen, they don’t have to process—or co-create—this physical event in their head. They see it, in real time, with a living body (which is part of the thrill of theater; anything can happen at any moment, including an actor forgetting their lines, having an emotional breakdown, or dropping dead). And though how these audience members co-create is similar to movie-goers, in live theater you never really forget that you’re participating in theater (like you can forget it’s a movie). Yet when done well, the fact of the actors experiencing the emotional content of the story live, and for the audience, is so powerful that it transfers it to the audience directly, which is one reason theater done right is so powerful—the actors’ emotions bleed through the audience. Intellectually, at the same time, since with theater the audience cannot fully forget they’re watching a play, they will be actively thinking about the material as well. All this, again, is co-creating.

But now we move onto prose, which is the focus of this piece. With prose, the co-creation that goes on between the writer and the reader is at a much higher level than with the other two forms. In fact, it’s easy to forget that a play script and a screenplay are literally technical documents, blueprints. They are not complete unto themselves. But a piece of prose is complete. It’s all there on the page (and then in the reader’s mind), or it’s nowhere.

And this is such a seemingly obvious thing, but where we all stumble, and where early writers in particular stumble—when simply describing the physical actions of the story. Because modern writers have been so exposed to video, they often see everything happening automatically at the visual level as they put their words down (like they’re putting down cues for a script someone else will direct and complete). However, the words they’ve put on the page do not necessarily have the capacity to transfer their vision to their readers. Remember, the reader builds their own version in their head, and if the cues on the page are not clear and complete enough unto themselves, or valid, the whole enterprise will collapse. Then you lose your reader. They turn on the TV; they move onto the next submission in the pile. Because you failed to manage the interface between yourself and your audience.

When you really think about what happens when a reader reads, it’s mind boggling. The only thing they’re given is a set of black marks against a white background, and from that, entire worlds spontaneously form in their minds. They experience this “dream,” and this is why we, as writers, not only want to present this dream to them, we want to be careful not to snap them out of it by missing a beat. Just remember, they will meet us more than halfway, because they want to go with us. This is one reason readers fall in love with writers—that voice they hear in their head when they read, that cadence, that rhythm, that tone; that sure hand that leads them through bends and curves, through misdirections and epiphanies; their personal guide who shows them thrilling and heartbreaking wonders. It’s such an intimate journey. All via black marks against a black background.

Steve Adams’s writing has won a Pushcart Prize and Glimmer Train’s New Writer’s award, been listed as a “Notable Essay” in Best American Essays, and anthologized. His prose is widely published, and his plays have been produced in New York City. He’s a writing coach and freelance editor at www.steveadamswriting.com, and you can follow him on Twitter at @iamsteveadams.

One response to “About Your Writing: Managing the Interface (Part 1) by Steve Adams”