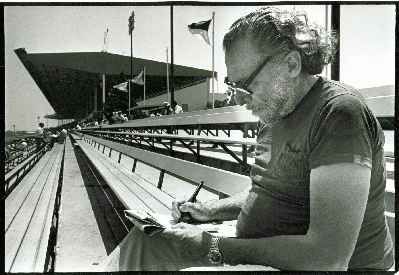 He couldn’t face the words, he wrote,
until he made it back from the track.

For a man famous for his refusal
to use metaphors, telling it straight like a tire iron,
this one kind of crept up on him, like they do.

Sort of the way the so-called real world punches suckers.

But perhaps that’s still too affected by half, since
the only thing, we know, worse than too little
Truth is too much of the same old shit.

Anyhow, Hank had his horses and his handicaps,
like all of us, no matter what we tell ourselves.
Whether it’s humping a desk or hustling the Morning Line,
or finding other ways to avoid assenting to work
altogether, we all need patterns and schemes.

Because by regulating our routines, they free up aspects
of ourselves—otherwise unengaged, like our dreams and
imaginations:

Or else we’re out of time, out of our minds.

So Hank had his horses and they told him who he was
on any given day: a winner, a loser, a player—and blinkered
or busted or flush, he returned to his humble post position and
that typewriter, waiting for him and placing its own bets:

Was the master in form? Pulling up lame? Wielding his whip?
Could he coax them through the muck, past the front of the pack?
Ending with the ultimate trifecta: booze and women and words.

(Then pause for a money shot, parading past the Winner’s Circle.)

Success is a salve that quenches a cultivated kind of thirst, and
what matters, finally, isn’t how you walk through the fire, but
the resolve to put your feet forward in the first place,
urging all those ideas to sneak up like solved secrets:

Reminders that even Long-Shots need somewhere to go,

Some way to live.

Sean Murphy has appeared on NPR’s “All Things Considered” and been quoted in USA Today, The New York Times, The Huffington Post, and AdAge. His work has also appeared in Salon, The Village Voice, The New York Post, The Good Men Project, Memoir Magazine, and others. His chapbook, The Blackened Blues, is forthcoming from Finishing Line Press. He has twice been nominated for the Pushcart Prize, and served as writer-in-residence of the Noepe Center at Martha’s Vineyard. He’s Founding Director of 1455 (www.1455litarts.org). To learn more, please visit seanmurphy.net/ and @bullmurph.