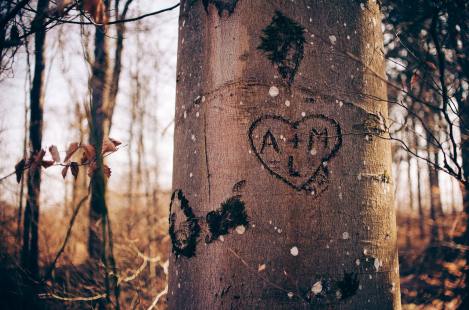 Our troubles began when our magnificent trees grew to heights obstructing the Uphiller views. Public Works sent letters to every Downhill resident with gibberish about the maximal vertex of vegetation.

The Downhill was the throbbing core of the town, founded in a bog. Our working stiffs fixed Uphiller sinks, replaced their roofs, cleaned their toilets, cooked their meals, and raised their children because there were no good jobs in the Downhill. Our dive bars served drinks that tasted of alcohol. We danced to real music. Out loud, we proclaimed that Uphillers were richer, not better, but nobody believed that at the end of the month when the rent came due. We squeegeed the bird shit off the picture windows of their golden sunset castles, each of us harboring a tapeworm secret hope that someday we’d hit it big and become Uphillers our own damned selves.

Imagine our disappointment when crews of mercenary Downhillers felled our majestic trees, stuffing each branch and twig through chippers. Initials, hearts and all. Then Mayor Stickuphisass sent us the bill.

In payment, we dispatched our graffiti royalty to redecorate the Uphill, with instructions to make it ugly, lest the work be hijacked by art arbitrageurs to galleries and museums. The feature piece across the face of City Hall portrayed Mayor Stickuphisass with graphic obscenities stuffed into every orifice of his maggoty syphilitic corpse, in the style of the great Mexican muralists.

In retaliation, the Uphillers cut off trash service. As if we weren’t raised in a superfund swamp belching methane, carcinogens, and microbes. Our garbage mavens selected the ripest bits to launch with giant bungee slingshots, punching out their immaculate picture windows like rotten teeth in a bar fight. Knowing they would have to employ us to replace the panes.

Mayor Stickuphisass made a speech atop the retaining wall with a bullhorn. Rule of law, sanctity of order, all rioting will be extinguished, blah blah blah. We almost extinguished him with a trash can of flaming creosote diapers.

This is war! he declared from the turret of an armored siege vehicle which we knew damn well did not fit through the tunnels in the retaining wall. Downhill streets didn’t grid to Uphill streets, our skewed avenues laid out by an alcoholic pioneer surveyor we claimed as patron saint. The viaduct to the Uphill had no sidewalk, the funicular kaput.

We’d known war for decades. Our nannies, house cleaners, and cooks called in false alarms from the poshest Uphill addresses to divert the Fire Department. Our off-duty firepeople launched slingshot payloads of dynamite borrowed from the quarry. The Uphill commanded the police. We were the police.

When the flames died down at dawn no one exited the smoldering McMansions. The Uphillers had decamped to their ranchos in Sedona, their villas in New Zealand, their bunkers in the Martian lake district.

We gazed down from refenestrated ruins onto the wasteland of stumps and trash below. Others occupied the dive bars and tenements, sharting out putrid art in lurid colors to cacophonous music. We sipped overpriced fruity drinks in stodgy restaurants over measly portions of bland food, watching from patios, verandas and lanais. Downhillers looked so small from a distance. Like cockroaches.

We summoned Mayor Stickuphisass and demanded he dispatch Public Works, stat, to clear the squalor. Knowing it would not be long before the foliage grew back and imperiled our views.
Years later, we looked up from our red-vistaed mansions in the Martian highlands at Europa in the night sky, where all the rich bastards fled. Some still yearn for a night in a dive bar, drinking cheap whiskey and listening to music that makes our ears hurt. Stumbling out into the landfill night to rediscover initials carved into the bark of an actual tree.