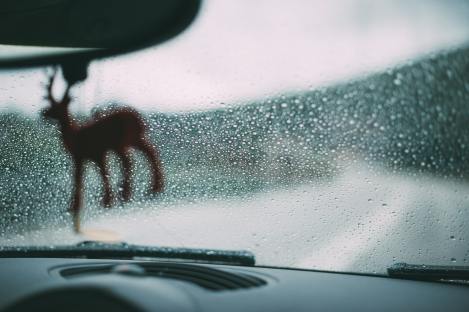 The Church of God van is burgundy with large white letters that read CHURCH OF GOD VAN along both sides. It comes with the brick rectory where my parents live in exchange for running music and sound. Hymns for Sunday mornings, Tuesday nights, every major holiday. A hell of a deal, my dad tells me, one arm displaying the van’s rows of bench seats like an unfurled prize. A real blessing, my mom whispers with deep-seated relief while folding laundry in the musty basement riddled with crickets and small snakes. No one mentions their old life with its defaulted mortgage; cars repossessed. All is forgiven. All is born again.

The Church of God van heads up to Ithaca, New York, the following summer with my dad behind the wheel. He is helping me move into another college dorm—one of so many—so I can keep working my campus job and paying for classes. He doesn’t lift or unpack anything—just assesses the view from the balcony and paces the carpet that smells of something trampled and rotting, like fresh deer skin seared on a car engine after leaping, unsuspecting, into traffic.

The Church of God van is parked a few hours later outside of the Ramada Inn where my dad treats me and my new summer college roommate to steak dinners. He has convinced the waitress to let us sit poolside under an umbrella and bring us free cokes. Perhaps he has convinced her of other things, too—I’ll never know because I finish my dinner early and wait for him on the curb, a skill I’ve learned over time.

The Church of God van passes me a few weeks later in the sweltering bloom of June. I’m heading to the grocery store when the van sails past me going the opposite direction. A surprise visit from my dad, maybe? I’d just had my 21st birthday but only my mom had called. I make a u-turn and follow the van. Back through downtown, up the hill, left towards campus and finally parked outside my dorm—my summer roommate glossy and waiting, tugging at a too short skirt. She waves to my dad who waves back from the driver’s seat. I watch them hug then kiss then laugh and lumber off in the van. They never see me and I never tell them what I’ve seen. There are some things you can never quite bring yourself to believe.

The Church of God van is parked outside my parents’ house that Christmas, the yard glazed in perfect snow. My parents host a candlelight service dressed in church clothes—my dad looking plaintive at the piano, my mom harmonizing with her eyes closed. They look like a nativity scene— waxy and brightly lit like the ones on church and courthouse lawns. Ones plagued by lawsuits, threats of removal, and graffiti—the pristine baby Jesus replaced with a balloon animal or bloody sack of raw meat. Everyone knows the nativity scenes aren’t going anywhere. They are merely wiped clean and restored. The doe-eyed baby Jesus nestled back in the manger, Mary’s shoulders straightened and squared, Joseph’s reputation gleaming once again. All is calm. All is bright.

Jessica Ripka is a writer and audio producer currently  working in film  in Los Angeles. A Tin House Fellow and Transom Story  Workshop alumna, she is currently working on a memoir.