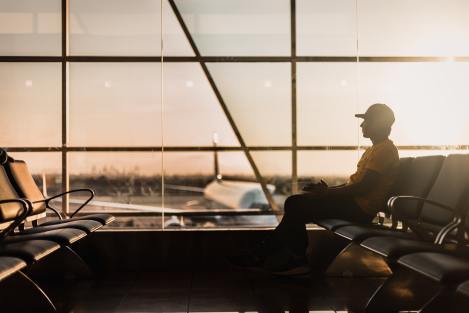 Steve doesn’t like Taco Bell, he doesn’t like airports, and he doesn’t particularly like being around large groups of people, especially Portland people. Too many of them are in a good mood and try to strike up conversations, which bothers him. The man sitting next to Steve has a burrito in his hand. It seems familiar, the way this man unwraps the top of the sour cream spotted paper.

“This is a good burrito,” he says to Steve. “It’s interesting. I wanted a burrito, I manifested one, and now I have one.”

Steve doesn’t say anything. He wishes he were back in Wisconsin. It’s been too long, and too many people outside the mid-west think it’s okay to strike up conversations with strangers. Not that this man is being too forward. He seems nice enough, but Steve doesn’t care for burritos because they remind him of a double-crossing, backstabbing, ‘friend’ Tim, who now provokes violet fantasies whenever he thinks of him.

“And, that’s just the thing,” says the guy, holding up two burritos. “I decided I wanted two, and now I have them. I manifested them.” He smiles, “They are perfect!”

Steve isn’t impressed. In much the same way he has issues with Tim, he has issues with tortillas and what fills them. Burritos are good when you’re eating them, then they’re gone. They are too much like all his past relationships.

“Three!” And, there they are. Two in his right hand, and one in his left. “It’s the power of positive thought,” the man says. “Do you know what manifesting means?”

Steve realizes what’s familiar about this guy, he’s just like Tim, who was there for Steve during the darkest parts of his marriage. Always there. He was there until the marriage ended, a true friend in all the ways Steve could see.

Steve answers, “Manifest means something is readily perceived by the senses.”

When it was all over, Tim married Steve’s ex-wife.

And, there they are. Two in each fist.

“That’s too many,” Steve says.

“I can see how you might think that, and I respect it.”

Then there’s six. Then, Steve stops counting. They pile high atop the bar. He gets up to walk away, but the manifesting-man follows, and burritos trail behind him like breadcrumbs in a fairytale.

“It’s the power of positive thinking,” the manifesting-man says, smiling.

Steve stops. Tim would love this man, they’re so much alike, friendly and well-disposed. Probably this is what his ex-wife likes about him too. PDX slowly fills up with burritos the way Steve imagines bullfrogs might during end-times. They carpet the concourse and fall from people’s pockets. Steve’s luggage becomes pregnant, splits, and bean filled tortillas spill out.

“This,” Steve says doubtfully, sweeping his hand across the terminal much the same way Tim would do when he was trying to make a gesture towards the magnificence of modern life, “is the power of positivity?”

“Yes, it’s simple. All you need to do is expel your negative thoughts,” the manifesting-man says. “They plague our minds and reenforce toxicity.”

Steve supposes this bad advice isn’t the worst he’s ever gotten. Tim was always telling him the point of a good life, of a satisfying life, was to treasure his relationships, not stuff. Stuff isn’t people and can’t make a person happy. Even when relationships sometimes don’t work out, that doesn’t mean they’re never worth it, that every person doesn’t have something to offer. He was always making burritos too. They were cheap, he said, probably the only thing money was good for. Steve has differing opinions on money.

“You can make money,’ Steve asks this manifesting-man. “Like, you can manifest it by expelling bad thoughts from your head?”

“Um.” The man looks down to his hands at what’s in them. “Burritos,” he says, smiling.

Steve pretends not to hear. “What am I supposed to do,” he asks. “Pretend my brain is a phone and swipe left on my negative thoughts? That’s kind of stupid, isn’t it?”

“That’s a negative thought right there,” the manifesting-man says.

“You should try it,” the manifesting-man says. “It’s not like it’s going to make you feel worse.”

This is a good point.

Steve goes to his mind-place. Here, he sees his distaste for burritos and attached to this distaste is Tim, who is attached to his ex-wife. He swipes them left. In their place is nothing. Just emptiness. He looks around PDX. Nothing has changed, but he feels ambivalent about the piles and piles that accumulate outside the windows of the terminal like banks of snow in a winter storm.

Steve thinks about home and how it’s been too long since he’s been back because Tim and his ex-wife are there. About how there’s something about summers in Wisconsin that he cannot verbalize, but feels intensely, and how this feeling builds up behind his eyes whenever he thinks of how the sun shines through the branches of the ash trees at the park down the street from the home he grew up in.

He keeps those feelings, and swipes left on the rest.

Then, Steve thinks of Tim, and how they often stood in the kitchen, talking while he chopped red onions, tomatoes, cilantro, and Jack cheese, with Tim telling him he needs to put out as much positive energy into the universe as he can, and that the people we love are worth the time we give them, even if we can’t love them forever, and all Steve can think of is stabbing, stabbing, stabbing.

Steve stands in the Delta terminal of PDX, empty of it all. The manifesting-man reaches out, Steve takes a burrito from his hand, unwraps it, and takes a bite. He closes his eyes and chews, slowly and quietly. It’s good.

Saul Lemerond is a dyslexic writer. He lives in Madison, Indiana, where he teaches creative writing at Hanover College. His book Kayfabe and Other Stories was published by One Wet Shoe Press in 2013. His work has also been published in Bourbon Penn, Gigantic Sequins, Decomp, Five: 2: One, and elsewhere. saullemerond.com