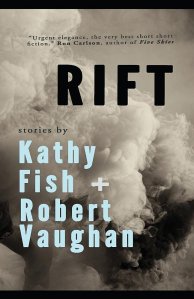 Reading Rift is like walking from one side of a city to another. The stories have the expansive diversity of a city crowd: flawed, ridiculous, and beautiful. The flash fiction collection, written by Kathy Fish and Robert Vaughan, has a wild variety that feels infinite and human. It is full stories that beg to be read twice or even three times each. Though reading it feels almost overwhelming, it is only this way because it is real; the book, like much good fiction, is a collection of truths.

Fish and Vaughan have created an incredibly tight collaboration. To be clear, this is a collection rather than a co-authorship – Fish and Vaughan write their own stories, playing off one another. The book pulls them into pairs, some of which speak to each other more obviously than others. While reading through, it was easy to lose track of who was writing, which speaks to the cohesiveness of the collection.

As its title suggests, Rift is about fracturing. From the first story, there is a sense of things breaking apart. A child’s interactions with a father’s new girlfriend – whose presence flip-flops from fairy godmother to evil stepmother – bloom into a three-page coming-of-age story. Sometimes, the rupture takes place within the narrative, as in Fish’s break-up story, “Pulse.” Other times, it takes place beyond the bounds of the story; and we are witnesses either to the aftermath or to a looming inevitability. Even so, the book is never repetitive. These fractures are not one note tragic, but also triumphant, transformative and mundane.

Rift is dense; it is not a book to read without your heart open and your thinking cap on. Unused to reading complete collections of flash fiction, it took me a moment to settle into the rhythm of the book. The stories vary in length from one paragraph to six pages, and the narrative focus varies from a single moment to an entire life. Some of the most powerful stories were those that painted with broad strokes. In “Come Loose and Fly Away,” when Fish describes of a growing boy, it feels utterly universal. She writes:

“The baby grows. The baby gets fat. When the world pushes, the baby starts to push back. He smiles. He gurgles. He grabs hold of hair and glasses and noses and boobs. He is the center of everything. He is at once all-powerful and powerless.” (179)

This could be the infancy of so many people; as the story goes on, it begins to narrow in, and the boy’s life becomes specific. Many stories in the collection function like this; with big statements twisting into tiny moments, all representing their own form of truth. And often, the brevity of the stories increases their potency. A number of stories were so powerful that that I had to put the book down after reading them.

With seventy-five stories in all, the collection has a lot of space for diversity of theme, tone, and subject. These three elements lent themselves to the organization of the book into four parts – Fault, Tremor, Breach, and Cataclysm. Though the pressure builds as the book progresses, every section has both light and heavy pieces, so that the reader can catch their breath between the most weighty moments.

The partnering of the stories is as varied as the stories themselves. Some pairs are connected by subject – one pair touches on rape and sexual abuse, for example. Others use the same form: in divisions, sections, or the use of subtitles throughout the stories. The final two stories both use the phrase “arms akimbo”, but otherwise are very different. Undoubtedly, some stories share more subtle connections, or are meant to converse, rather than mirror.

Admittedly, I tried to make a little game of finding a “style” for each author. Fish has a knack for strange humor. In “There is no Albuquerque,” a story narrated by a girl with horns, she writes, “The plastic surgeon says if he were to remove the horns I’d go blind. Guess I’ll hang onto them, I tell him” (33). Vaughan used some spectacular descriptions, “crickety seats” (126) or “black cats piled on top of one another like the Dallas Cowboy Cheerleaders” (104). In the end though, there were exceptions and surprises for each author; Fish and Vaughan’s virtuosity as flash writers was constantly evident.

After finishing the book, I felt I had returned home from that long city walk; the stories bumped around in my mind for days, like puzzling encounters with strangers and friends. In one of Fish’s stories, “River,” the narrator explains a moment on a camping trip:

“He stopped and cupped his hands around his mouth. Ow ow ow ow ow ow owwwwwww, he called. And far off, I heard a smaller voice, owwwwwww owwww.

My grandson, he said. We pretend we’re wolves.

This is how the book felt, like an oddly alluring series of calls in the dark, some with answers, some without. There were moments of peace and violence, of connection and loneliness, of levity and weight. Ultimately, the beauty of Rift lies both its scope and its detail. Even on the second read through, every story held its own surprises, some small, some large, all profoundly human.

One response to “Review: Rift by Kathy Fish and Robert Vaughan (reviewed by Amelia White)”